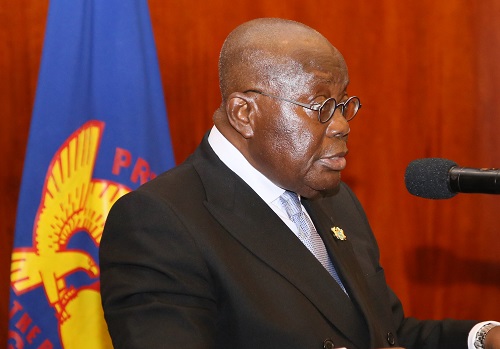 President Nana Addo Dankwa Akufo-Addo has described as “not right” the wide gap between the policy rate of the Bank of Ghana and interest rates charged by commercial banks.

He said the disparity was a derailment of efforts at making the private sector competitive, and therefore, charged the central bank to interrogate and find a solution to the issue.

“It is certainly not right that the central bank's monetary policy rate stands at 13.5 per cent, while commercial banks lend to the private sector at rates of 21 per cent and above,” the President said.

President Akufo-Addo, who was speaking at the swearing- in of a 12-member governing board of the Bank of Ghana (BoG) at the Jubilee House in Accra, further said there was the need to bridge the gap if the country was to realise the vision of an economy that was globally competitive, adding “I believe the BoG is best placed to lead this process of reflection and action”.

The board is chaired by the Governor of the BoG, Dr. Ernest Kwamina Yedu Addison.

Some board members of the Bank of Ghana

He said the initiative would open up the entire gold sector with the completion of a gold refinery in the country which the President added was necessary for value addition and also ensuring transparency in the small-scale gold mining industry.

President Akufo-Addo further welcomed the decision by the BoG to pilot a digital currency which he said would completely transform the payment system and deepen financial inclusion.

The President also commended the BoG for the banking sector clean-up which saved the economy from collapse, restored sanity and in the process saved funds of some 4.6 million depositors.

He said the government provided GH¢21 billion for the exercise to ensure a more robust financial and banking sector for the rapid development of the nation.

The board chairman expressed appreciation to the President for the confidence reposed in them, and said the economy was on a gradual path to recovery from the adverse effects of the COVID-19 pandemic.

He, however, said the uncertainties in the domestic economic environment with regard to the third wave of the pandemic called for prudent policies to firm up the recovery process to protect livelihoods and jobs without stoking inflationary pressures.