Burnt building at Makola pulled down 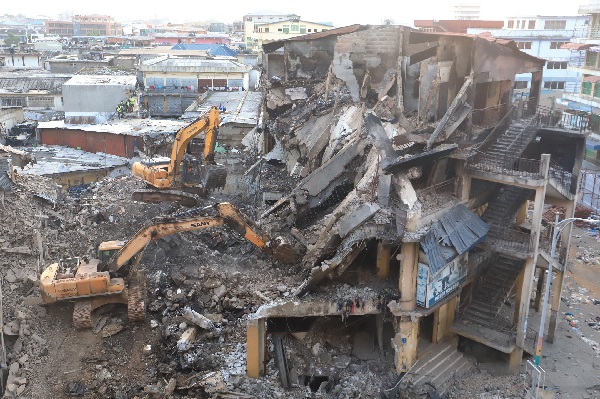 Bulldozers pulling down the remains of the burnt building. Picture: SAMUEL TEI ADANO

The three-storey shopping complex at Makola in the central business district of Accra that got burnt in July this year has been pulled down.

Soldiers from the 48 Engineers Regiment of the Ghana Armed Forces (GAF) started the demolition exercise at 5 a.m. yesterday.

They were supported by officials from the Accra Metropolitan Assembly (AMA), the National Disaster Management Organisation (NADMO), the police and the fire service.

With two bulldozers deployed for the exercise, the soldiers tore apart the burnt structure, which was directly opposite the new Makola Shopping Mall and two blocks away from the GCB Bank.

The demolition exercise was based on a recommendation by a committee set up by the AMA to investigate the fire incident.

The committee had recommended that the building should be pulled down because the fire had compromised its structural integrity.

Head of Public Affairs of the AMA, Mr Gilbert Nii Ankrah, told journalists that the committee came to a conclusion that the building was a looming danger if not pulled down.

He said based on the recommendation by the committee, the AMA contracted the services of the GAF to undertake the exercise.

“It is a private property so when the demolition is done, the owners can look at redeveloping it. The AMA’s main interest is to bring it down to prevent any future catastrophe. The central business district is a very busy and congested area, and we want to protect lives,” he said.

He said all stakeholders, including the owners of the building, were part of the decision to pull it down.

Mr Ankrah said the committee came to a conclusion that the fire was caused by a generator used by one of the shop owners.

To prevent such mishap, he said the committee recommended that such shop complexes should have a centralised generator system in case of power outages, instead of individual shop owners having their separate generator sets.

Also, he said the committee recommended changes in the wiring system of markets to meet international standards.

“Thankfully, the government under a project financed by the Millenium Development Authority (MiDA) has started the rewiring of major markets in Accra,” he added.