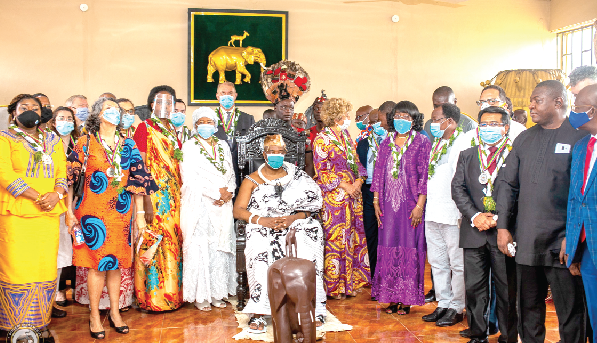 • King Tackie Teiko Tsuru II (seated) with some of the diplomats at the Ga Mantse Palace at Kaneshie in Accra
30.5k Shares

Members of the Diplomatic Corps in the country last Monday paid a courtesy call on the Ga Mantse, King Tackie Teiko Tsuru II, at the Ga Mantse Palace at North Kaneshie in Accra.

The visit was to strengthen the relationship between the diplomatic community in Ghana and the Ga Traditional Council for their mutual benefit.

The Dean of the Diplomatic Corps, Mrs. Claudia Turbay Quintero, led the group, which included representatives of some international organisations in Ghana, such as the United Nations Educational, Scientific and Cultural Organisation (UNESCO) and the African Union (AU).

In the company of the visiting delegation were a Deputy Minister of Foreign Affairs and Regional Integration, Mr. Charles Owiredu, and the Founder and Leader of the Worldwide Miracle Outreach, Rev. Dr. Lawrence Tetteh.

The visiting envoys were treated to a display of the rich Ga tradition and culture.

Mrs. Quintero, who is also the Colombian Ambassador to Ghana, said effective collaboration between traditional authorities and the Diplomatic Corps could become part of bilateral programmes of the diplomatic community.

She thanked King Teiko Tsuru for hosting the delegation and said the invitation was an expression of his commitment to serve as an agent of development.

“We acknowledge your influence and power within the traditional culture of Ghana where you preside over approximately four million people,” she said.

She also said the visit offered a unique opportunity for the envoys and representatives of the international organisations to get closer to the traditional leadership, adding: “I am sure that those of us who find it possible to support some of the initiatives of the traditional authority will do so accordingly, and eventually we can create cooperation programmes to become part of the body of bilateral activities among our countries and Ghana.”

Mrs. Quintero further said the visit marked the beginning of the establishment of a friendly dialogue between members of the Diplomatic Corps and the Ga Traditional Council.

The visiting envoys made individual presentations to the traditional council.

King Teiko Tsuru highlighted the importance of girl-child education to the development of the Ga State.

According to him, the Ga Traditional Council, which he chairs, also intended to fund the training of girls in entrepreneurial skills in the area.
He said there was the need to establish a technical committee to define a clear path on girl-child education.

For his part, Mr. Owiredu reaffirmed the commitment of the government to work together with traditional leaders for the accelerated development of the country.

He thanked members of the Diplomatic Corps for extending courtesy to the traditional authority and described the move as a strategic partnership that would yield dividends for both the corps and the Ga State.