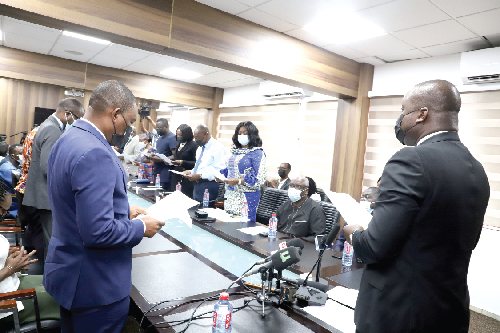 Mr Samuel A. Jinapor (right), Minister of Lands and Natural Resources, swearing the Minerals Commission Board into office in Accra. Picture: GABRIEL AHIABOR

The Minister of Lands and Natural Resources, Mr Samuel Abu Jinapor, has urged the governing board of the Minerals Commission to develop a comprehensive policy to regulate activities of small-scale mining in the country.

Such a policy, he said, must strike a balance between responsible mining and illegal mining also known as "galamsey".

"The contribution of gold to the country's GDP is enormous, and indeed small-scale mining contributes 40 per cent of it. We are the leading producers of gold in Africa now because of the contribution of the SSM. We need to protect that sector to consolidate the gains," the minister added.

Mr Jinapor was speaking at the inauguration of the governing board of the commission in Accra yesterday.

The nine-member board is chaired by a former Minister of Tourism, Arts and Culture, Mrs Barbara Oteng-Gyasi, with the Chief Executive Officer (CEO) of the commission, Mr Martin Ayisi, as member.

The others are the Savannah Regional Chairman of the New Patriotic Party (NPP), Alhaji Iddrisu Sulemana; the Members of Parliament (MPs) for Okaikwei South and Lower West Akim, Ms Darkoa Newman and Mr Charles Acheampong, and a member of the Internal Audit Agency, Mr James Koligu Ataki.

The rest are Mr Emmanuel Vincent, a legal practitioner; the CEO of the Association of Indigenous Miners, Mrs Judy Nakuor Crayem, and the acting Director of Administration of the National Commission on Culture, Togbui Awusu III.

The board is to provide policy direction and oversight responsibility in the management of the commission.

Mr Jinapor further urged the members to hit the ground running by establishing a framework to sanitise the SSM sector.

"You have been sworn into office at a very turbulent time when we are grappling with illegal mining menace. The Lands Ministry has held the fort in the absence of the governing board; so now that you have taken office you must provide the needed reforms and policy direction for the management to implement," he said.

The minister also entreated them to lead the process to diversify the mining industry since the country had abundant mineral resources.

"Let us appreciate that it is not gold commission that you are supervising; it is minerals commission, and the minerals are many. We have gold, lithium, clinker, salt and many others, so take care of them," he said.

For her part, Mrs Oteng-Gyasi gave an assurance that the board would work diligently to strategically place the commission as a key player in advancing the Ghana Beyond Aid and industrialisation agenda of the government.

"We know that there is rising illegality in the SSM sector and we will take up the challenge to deal with it.

"We have to move from local content to local participation because we believe that will help generate more employment and revenue," she added.