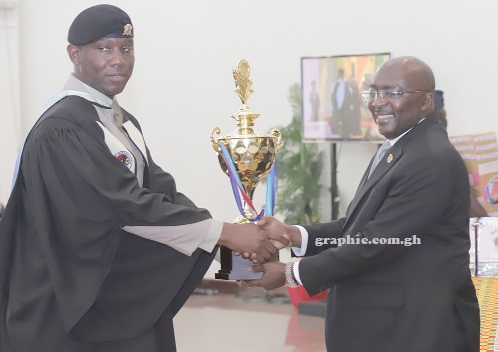 He said the military and technology were inseparable, and, therefore, opportunities for deepening knowledge of that domain for the benefit of humanity should not be overlooked.

Dr Bawumia made the appeal when he addressed this year’s joint graduation of the Senior Command and Staff Course 43 and Master of Science in Defence and International Politics (MDIP) at the Burma Camp in Accra yesterday.

“As was revealed in the commandant’s report, the college’s programmes are highly patronised and need to serve as a motivation to the Ghana Armed Forces to explore and tap into other areas of study that are necessary for the socio-economic development of our dear nation,” he added.

The Vice-President, therefore, urged the military high command and the staff college control board to leverage their status and prominence to work towards sustaining the gains already achieved, and possibly venture into other untapped areas where the military had a comparative advantage.

In all, 85 officers — 59 of them from the GAF and 26 from 11 African countries, including Benin, Botswana, Burkina Faso, Cote d’ Ivoire, Guinea and Nigeria — graduated.

The officers pursued a Master’s degree programme in Defence and International Politics in addition to the Command and Staff Course, and Dr Bawumia said: “You are now equipped to perform your roles both in the national and international arena”.

He advised the graduates to make it a duty to ensure that their output in future deployments reflected the high standards.

“You are further charged to go out as torchbearers and worthy ambassadors of the college. You will be expected to exhibit exemplary leadership qualities, exceptional communication skills and appreciable knowledge of the military and global issues.

“I urge you to maintain a high standard of discipline and professionalism in your respective armed forces and other institutions to enhance the civilian-military relationships,” he stressed.

He also commended the graduating class of the MDIP course, and said security and developmental issues, which formed a significant aspect of their respective course packages, required multi-agency collaboration and varied skills and capabilities.

He further urged the graduands of the MDIP class to stay in touch with their military counterparts to exchange information regularly.

Reiterating the call for vigilance at all times, the Vice-President said terrorism remained an imminent threat to Ghana and its neighbours.

He said the recent attacks in Burkina Faso, Togo, and Cote d’ Ivoire highlighted the determination of the terrorists to expand beyond landlocked Sahelian countries, where the insurgency had devastated thousands of lives and property in the last decade.

“This campaign will provide further education and highlight the challenges in the sub-region regarding terrorism and other activities that threaten the security of the country. I will, therefore, encourage you to be active participants and help to educate your communities,” he advised.

Dr Bawumia said the five-year strategic plan of the college was forward-looking, and expressed optimism that it would achieve the key objective of clearing the backlog of officers due for command and staff training and then make room to accommodate increased intake at the Ghana Military Academy.

Major Raymond Owusu-Ababio of the Ghana Army won the Honour Graduate Award for the Senior Command and Staff Course, while Rebecca Osei-Fordjour from the Ministry of Foreign Affairs and Regional Integration emerged the Overall Best Student in the MDIP class.