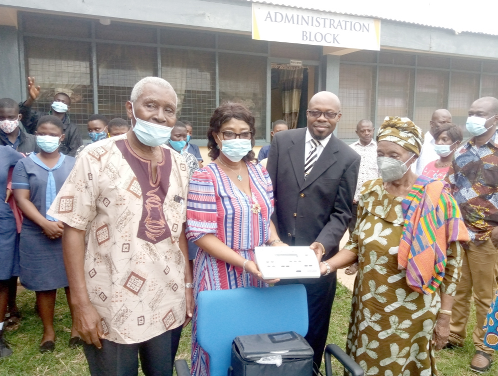 The Headmaster of the Demonstration School for the Deaf (DemoDeaf), Mr Setumte Ametewee, has appealed to the government for medical support for the inmates.

He said conducting medical assessment at the school had been very challenging over the years as the school also lacked a resident professional health worker at the school's infirmary.

In an interview with the Daily Graphic during the donation of an audiometer by Dorothy's Hope Incorporated, a non-governmental organisation (NGO) in collaboration with Queen Bee Insurance, all based in the United States of America, last Wednesday, at Mampong in the Akwapim North Municipality in the Eastern Region, he said the school formally sent a request to the Municipal Health Directorate four months ago but was yet to receive a feedback.

Mr Ametewee also appealed to corporate organisations to assist the school with basic drugs at the infirmary to help deal with the health challenges of the inmates.

Mr Awetewee lamented the inadequate space in the students' dormitories.

He said the situation had been very worrisome due to the COVID-19 pandemic, with the student population currently at 466 having to manage the available space in the dormitories.

The situation, he explained, had led to the refusal of admission of some 91 students from various communities on the waiting list.

He lauded the government for commencing the construction of two new dormitory facilities but appealed that work be expedited to address the alarming space challenge.

Dorothy's Hope Incorporated, in collaboration with Queen's Bee led by Professor Nathaniel Kofi Pecku and his wife, Mrs Dorothy Ampofoa Pecku, and other relatives donated an audiometer used to determine the hearing ability of the hearing-impaired students.

The device, valued at GH¢16,500, is to augment the only audiological equipment the school currently has to help in the assessment of the students' hearing for medical referral as well.

Professor Pecku told the Daily Graphic that the donation was to improve the learning ability of the pupils in the school and assist teachers in taking the students through assessments.

The donation, according to Professor Pecku, was initiated by Mrs Theresa Otuko Pecku-Laryea, his daughter, who is resident in the US, in the name of the NGO she named after her mother, Mrs Dorothy Abena Ampofoa Pecku, to help with her philanthropic services in Mampong where she hails from.

The Headmaster of DemoDeaf expressed gratitude to the donors while describing the donation as very timely for the benefit of the pupils and some other community members of Mampong with hearing impairment.