Dealers in fake agrochemicals, others to face prosecution 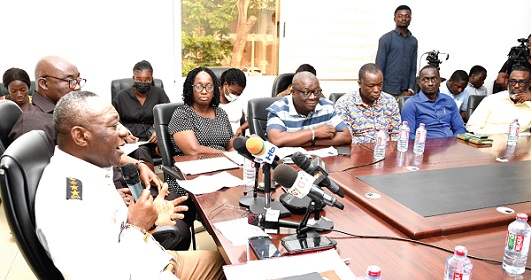 The Environmental Protection Agency (EPA) has given a two-week ultimatum to dealers in fake agrochemicals, including pesticides and fertiliser, to remove the items from the market or face arrest and prosecution.

This ultimatum is part of the war the EPA is waging against such dealers in its bid to safeguard lives, as the chemicals have direct links to food.

It follows reports and complaints received by the agency from end users of these chemicals, as well as members of the public, about the efficacy and potency of the substances.

“We are giving them two weeks to get those materials off the market,” the Executive Director of the EPA, Dr Henry Kwabena Kokofu, said at a press briefing in Accra last Wednesday.

In a similar vein, Dr Kokofu cautioned multinational companies which dealt in agrochemicals against the direct retailing of their products to users.

That, he said, was illegal, as the retailing of agrochemicals in the country was the strict preserve of indigenous Ghanaian companies, and said:

“The laws of the land will be applied; if sanctions are required, we will not hesitate to employ them. They can, as it were, engage Ghanaian retailing agents to do that job for them,” he added.

The acting Director of the Chemical Control and Management Centre (CCMC) of the EPA, Joseph Edmund, also urged agrochemical users to purchase chemicals only from companies licensed by the agency in order not to fall victim.

“We have a list of registered pesticides that we issue and if you deal in such products, it is your responsibility to have that list, so that when you’re going to buy, you get the right one,” he said.

Furthermore, Mr Edmund said the EPA was setting up more labs to enhance the testing of chemicals before they were allowed on the markets as part of its effort to curb the nuisance of fake agrochemicals.