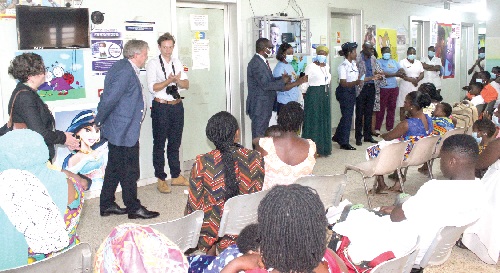 The Danish Embassy in Ghana has organised a stakeholders’ engagement on diabetes disease in the country.

The Ambassador, Tom Norring, said dealing with the disease in an already burdened healthcare system required new ways of “doing business”, hence the need for private-sector participation to ensure quality health care for the people.

The event, which took the form of a breakfast meeting and visit to the Diabetic Department of the 37 Military Hospital in Accra, was attended by healthcare professionals and some members of the business community.

Mr Norring said after many years of development cooperation with Ghana, and with over 23 years of support to Ghana’s health sector, Denmark’s role in Ghana had transitioned from a focus on aid to commercial and political cooperation.

“In our collaboration with Ghana, a partnership between the private and the public sectors is key,” he added.

According to him, the country had witnessed a growing middle class, but said the development had brought in its trail a change in lifestyle and a burden of diseases.


Mr Norring said non-communicable diseases, such as diabetes, had been on the rise in Ghana in the last decade, quoting statistics from the Ghana Health Service (GHS), which said over 200,000 diabetes cases were detected at outpatient departments of hospitals annually.

He said as part of the Danish government’s effort to help reduce diabetes cases in the country, the 37 Military Hospital was being supported to implement a Novo Nordisk Changing Diabetes in Children (CDiC) programme which provides free insulin, among other care, for children with diabetes.

The Ambassador added that under the ‘Base of the Pyramid Project’ that facilitated access to diabetes care for the working poor in low and middle-income countries, Novo Nordisk, a global healthcare company, had, since 2014, collaborated with partners in the health sector to establish 10 diabetes support centres in Ghana which provide care and treatment for diabetics and training for healthcare professionals.

He said in 2021, Novo Nordisk, together with its partners, also launched an iCARE programme to provide care and support for children and the aged living with diabetes.

The Director of Infrastructure, Ministry of Health, Ben Ampomah Nkansah, said some diabetes cases could be attributed to unhealthy lifestyles, such as physical inactivity, obesity, poor diet, alcohol and tobacco use.

He said apart from diabetes causing damage to body organs, such as blood vessels, heart nerves, kidneys and eyes, when poorly managed, the disease also had dire economic, social and cultural implications for individuals, families, caregivers, friends and loved ones.

The director expressed appreciation to Novo Nordisk for its support to the sector over the years.

The Business Unit Head of Novo Nordisk in charge of English West Africa, Jude Abonu, said since the launch of iCARE in June in 2021, some 1,114 patients had been cared for, with 15 diabetes clinics established, while 208 healthcare professionals had been trained.

He also said 311 children were benefitting from its CDiC project, while 17 CDiC clinics had been established and 1,422 healthcare professionals trained.

Mr Abonu added that 5,000 patients had been cared for at five hospitals in four regions.