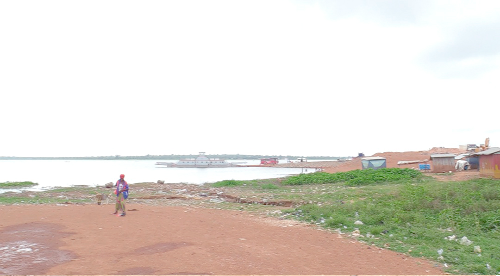 The banks of the Oti River littered with plastic waste

Haphazard development and its attendant challenges of lack of access roads, potable water, drains and the absence of designated refuse dump sites and inadequate dustbins are the major issues confronting residents of Dambai, the capital of the Oti Region.

Some residents have even turned their dustbins into containers for storing corn dough, water and cooking utensils while others are calling for more of the dustbins in their homes.

Residents wait for the clouds to form and begin to assemble the garbage in their homes and other places to put in the two drains to be washed into the river when it rains.

These unsanitary practices notwithstanding, some residents have complained about the abortion of the monthly clean-up exercises instituted to bring sanity and cleanliness to the community.

These concerns came up during a panel discussion in Dambai last Friday as part of the Graphic/ Zoomlion Ghana Limited Sanitation Stakeholders Dialogue in partnership with the Environmental Sanitation Providers Association and Mcvities.

This was corroborated by the Oti Regional Minister, Mr Joshua Makubu, who said the sanitation situation in Dambai was dire, making those who ate from food vendors in the town highly susceptible to sanitation-related diseases such as typhoid.

A resident, Mr Stephen Kobina  Wajah, expressed concern about the unavailability of properly designated areas for the siting of refuse containers and dump sites, which had made waste management a tedious job.

Another resident, Mr Nico Simon, also expressed worry about the proximity of the current dump site to settlements and said it behoved traditional authorities to play their part in the siting of refuse dump sites in the municipality to ensure proper waste management.

In response, the Gyaasehene of the Chonke Traditional Area, Nana Chikpa Kwame II, concurred with the submission but indicated that the haphazard development ongoing in the area prevented most traditional leaders from determining where such refuse dumps should be located.

He said as the administrative structure of the region took shape, there was a sharp focus on town planning and as such, going forward, all areas earmarked for development would consider such important land allocation for waste management.

Most residents rely on underground water, which is made available through mechanised boreholes under the management of the Community Water and Sanitation Agency.

Some traders, including food vendors, however, continue to depend on the Oti River (rendered unwholesome due to the dumping of both solid and liquid waste) as their source of water for household use including cooking.

A media practitioner at Dambai, Mr Isaac Kodua, in his submission, said although drains constructed from the town connected to the Oti River to mitigate flooding during rainy days, some residents had transformed the facility into carriages for plastic waste and sewage, which ended up in the river.

He, therefore, recommended that waste bins be made available along the major street as a way of dealing with indiscriminate littering.

Mr Kodua’s submission was, however, met with an explanation by the Public Jobs Manager of Zoomlion, Ms Sefakor Yawo Kugbonu, that most of the waste bins made available by her outfit ended up being stolen by unscrupulous individuals, which ultimately defeated their purpose.

She, however, pledged that sanitation taskforces, especially those stationed at the Dambai market, would be equipped with the appropriate cleaning logistics upon request in order to make them efficient.

She also encouraged households to contact the waste management company for their household bins.

The Municipal Chief Executive for Krachi East, Mr Patrick Jilima, who was also on the panel, said the situation was a two-pronged issue, which equally encompassed attitudinal change in order to solve the sanitation challenges.

He said it was the civic responsibility of residents to end indiscriminate littering.

He urged residents to police one another and report any misconduct to authorities.

An Environmental Health Officer, Mr Joseph Dah, said the Krachi East Municipality was one of the few assemblies with gazetted sanitation bye-laws and they had thus pledged their enforcement to the letter. #GraphicCleanGH