BY: Alberto Mario Noretti
Category: General News
Members of the Loso Community performing a dance at the durbar.
30.5k Shares

This year's Te Za (Yam Festival) of the people of the Asogli State in the Volta Region ended last Saturday with pomp and ceremony.

The month-long celebration was on the theme: “Let’s eschew greed, unite for peace and development”.

A durbar was held at the Ho Jubilee Park to climax the celebration with traditional and cultural dances, as well as an exhibition to showcase the potential of the area.

It was preceded by a long procession of chiefs and queens from the various divisional areas of Asogli.

Among the large gathering at the durbar was a delegation of Ewe chiefs from Togo, led by Togbe Dzudzoli Detu X, the Chief of Lome-Aflao-Gakli.

The Agbogbomefia of Asogli, Togbe Afede XIV, expressed concern that greed, which he said was not part of the Ghanaian culture, had gained roots in the country and called on the people, especially the youth, not to engage in that vice.

He also mentioned political fanaticism, which he said had also found its way into the country’s political landscape, thereby retarding the development of the nation.

The Agbogbomefia attributed the situation to politicians being more interested in seeking re-election than working towards addressing the challenges facing the country.

“It is time we all put national interest first before political party considerations,” he said.

Togbe Afede said the Te Za had served to strengthen the ties between Ewes in the country and their kinsmen in Togo in recent times. 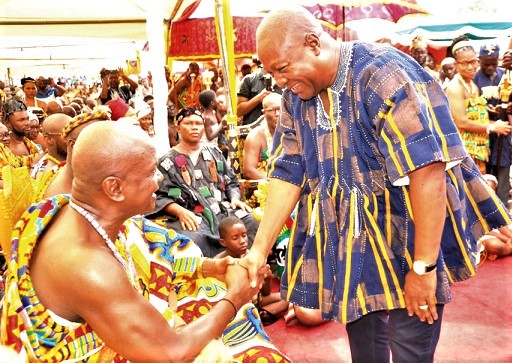 He urged chiefs to unite as leaders with a common purpose to pave the way for the rapid development of the nation.

Togbe Dzudzoli Detu, who led the Togo delegation, called for more collaboration to help develop the two countries, given the common ties between them.

“We should maintain the bond to promote our mutual development,” he added.

Mr Mahama, who was the guest speaker, urged the citizens to uphold the virtues of honesty and patriotism and entreated the government to help ameliorate the plight of the people in the midst of the economic challenges facing the country.

He said the economic woes were evident in the rising trend of joblessness, lack of adequate educational and health facilities and rising inflation, adding that the situation posed a bleak future for the nation.

“We expect our leaders to move the country forward with the truth and not backwards with lies,” Mr Mahama said.

According to the former President, success only came after hard work, and that prayers alone without effort would not help in the progress of the nation.

On the chieftaincy institution, he said it remained as relevant today as it was in the past because of the vital role it played in national cohesion and governance.

He commended the people of Asogli for their strong resolve to uphold the prevailing peace in the area, saying it was an important requirement for progress.

Mr Rajaram described the cultural exposition displayed by the people of Asogli as an asset for tourism development in the area.

He said India was ready to partner the government to explore sectors such as agriculture, rural development, renewable energy, health and education for the mutual benefit of the two countries.

“India is one of the largest trading partners of Ghana and we now look forward to, after the COVID-19, deepening our engagements,” he added.