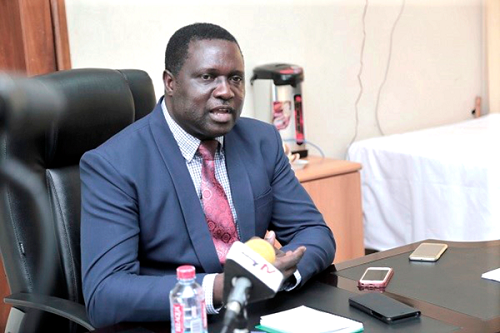 The Ministry of Education will act appropriately if any local printer raises concerns of a publisher trying to circumvent what had been agreed on in the printing of government textbooks locally.

However, it has ruled out the formation of a government task force to police the printing of the textbooks, as requested by the Ghana Printers and Paper Converters Association (GPPCA).

Speaking with the Daily Graphic in Accra yesterday, the sector Minister, Dr Yaw Osei Adutwum, said: "I don't see the ministry setting up such a task force.”

He was reacting to a front-page story of the Wednesday, April 20, 2022 edition of the Daily Graphic, in which the GPPCA had appealed for the formation of a task force.

According to the association, it had evidence that some foreign printers were already in the country, contacting publishers and printers with juicy packages to take up the printing of the books in their countries.

But the minister asked: “We have given out the job to local printers who are members of the association; why are they asking us to regulate the association?"

Nevertheless, he indicated that the ministry was taking the concerns raised seriously and would act if any printer raised issues of a defaulting publisher.

Dr Adutwum said he would not worry himself about monitoring and asked the GPPCA to do the monitoring itself.

"You have an association and you have petitioned the government to make sure we give the job to you. Now we have given the job to you and you are asking me to come and regulate your association," he said.

He asked the association to apply its own sanctions and not to request for a task force.

The minister said if the association felt that its members had not been given the entire printing job, it had the right to find out.

He was of the belief that the ministry had done the needful by ensuring that every publisher submitted a memorandum of understanding with a local printer, which all the publishers did.

Dr Adutwum said all the printers submitted by the publishers were Ghanaians, "and our understanding that the printing will be done locally and no one has negotiated anything to the contrary".

He said the contract signed with the publishers was public information with the Public Procurement Authority (PPA) that could be accessed by anybody.

He said the names of the publishers contracted were public knowledge and the volumes each publisher was to outsource to its selected local printer were equally public information.

He encouraged the printers to contact the PPA to keep themselves abreast of the contract and the quantities, and that if they had any queries after that, they were free to contact the ministry.

“We are yet to receive any concerns raised by the printers who have been selected to print the textbooks. If they bring such concerns to us, we will deal with them,” Dr Adutwum said.

He acknowledged the fact that because of the sheer volumes some of the subjects would require, publishers could contract more than one printer.

Responding, the President of the GPPCA, Mr James Appiah-Berko, thanked the minister, saying the association would contact the PPA for the detailed contract documents.

He hinted that the association might seek a meeting with the minister in the event that it ran into any challenges.

He said even though the idea of a task force or a monitoring team had been discounted by the minister, the association would still form a monitoring team to visit the printing houses and, where necessary, offer technical support and any help that would be required.

He said the last time the printing was done locally, a similar team was formed and it was of great benefit to the printing houses.

Mr Appiah-Berko explained that the team would be an internal mechanism to ensure that the right quality of inputs were used, so that "we do not compromise our own standards".