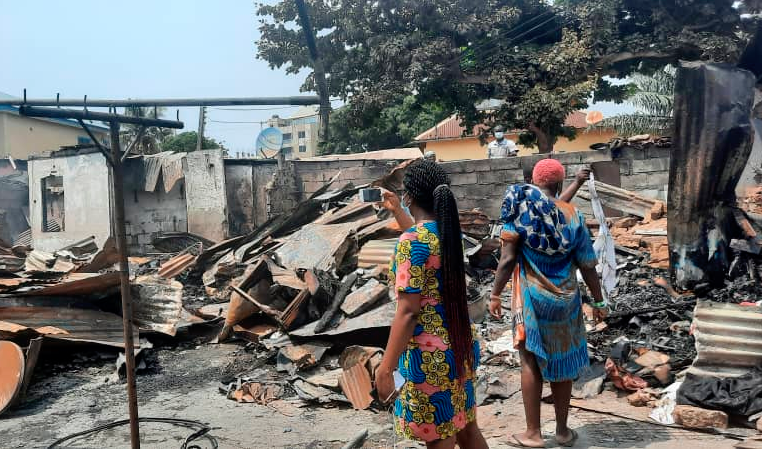 Some 16 rooms in a 21-room compound house have been burnt after fire swept through the residential property at Osu Richter Stretch in Accra Thursday.

Personal belongings, including stationery, food, utensils, money and furniture, were burnt into ashes in the inferno that lasted more than four hours during the pre-dawn incident.

There were no casualties, however.

Some residents and victims, who said they watched the scene helplessly, said the fire started around 2:30 a.m. while they were sleeping.

The cause of the fire was not immediately known.

A resident, Maxwell Asare, said he was asleep when he felt his room engulfed with smoke.

“It was when I came out that I saw flames coming from some rooms, which was later accompanied with an explosion and within 10 minutes, the rooms, including mine, were on fire,” he said.

“The fire started around 2:30 a.m and by about 2:45 a.m, it had consumed a lot of rooms. We called the fire service, and it took them about an hour to get here. But when they came, they tried. It took them about four hours to bring the fire under control,” he added.

Another victim, Juliet Akoto, said they moved from door-to-door to ensure that no one remained indoors while the fire blazed.

Yet another victim, Sister Yaa, appealed to the government to come to their aid.

“I have lost everything, but I thank God I am alive. For now, we need shelter and some funds,” she said.

Mr Xerton told the Daily Graphic that the fire service found difficulty in accessing the house, causing the prolonged effort in containing the fire.

He said the National Disaster Management Organisation (NADMO) and the Osu police had also visited to assess the situation.

He called on philanthropists to come in and lend support.