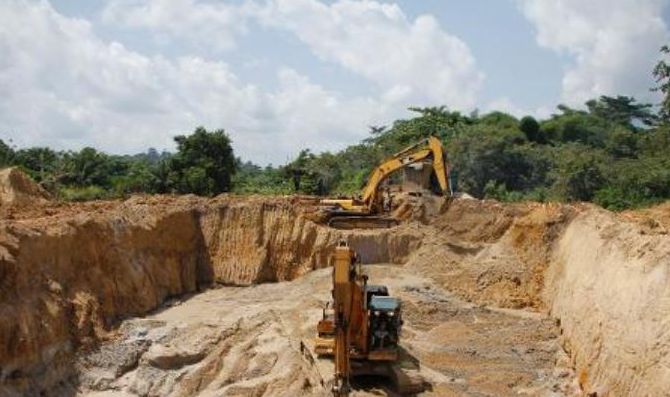 Mining companies in the country have expressed concern over the encroachment on their concessions by some armed community mining operators.

AngloGold Ashanti, Obuasi, Newmont Ghana, Golden Star Wassa, Persus Mining and Gold Fields Ghana have all had turns to complain about the rising encroachment on their concessions by some community mining operators.

During a tour by the Parliamentary Select Committee on Mines and Energy to some mining communities in the Western Region, the Managing Director of Golden Star Resources, Wassa Mine, Mr Shadrack Adjetey Sowah, said the community mining operators have taken over large parts of their concessions.

“We have no problem with community mining, but our problem is the encroachment on our concessions, especially where we have invested so much in exploration,” he bemoaned.

“When the military was at post, there were no illegal mining activities on the concession. But with the withdrawal of the military, armed illegal miners have returned to cause havoc on our concession,” he added.

The Chief Executive of the Ghana Chamber of Mines, Mr Sulemanu Koney, said the problem of encroachment on mining concessions by operators of community mining cut across all mining firms in the country.

“We have concerns from almost all mining companies that their investment in exploration is in danger because areas they have explored and are ready to mine within their concessions have been taken over by the community mining operators,” he said.

The government, on December 17, 2018, lifted the two-year ban on illegal mining after the Inter-Ministerial Committee had successfully developed a comprehensive policy framework to regularise small-scale mining across the country.

Worryingly, though, an old and crucial problem has already started emerging, even as the rollout of the initiative is still in its early stages. This is the problem of encroachment on the concessions held by large-scale mining companies.

The problem, and the failure of the Community Mining Project (CMP) to resolve illegal mining, is a complex one.

At the heart of the problem is the fact the community mining operators invade specific areas in the large-scale mining concessions with high mineral endowment determined by investment in exploration.

While some illegal miners are satisfied with focusing on marginal gold fields where mineral endowment is too small to attract the large mining firms, many others are drawn to the concessions of the mining companies where the existence of relatively large gold deposits has already been established.

But the worry, according Mr Koney, was that most of the mining companies whose concessions were being encroached on by the community operators were listed companies whose detailed assets were known to the markets.

He said the invasion of mining concessions by some armed community mining operators had further been compounded by low production levels, new rising exploration cost and ultimately their willingness to invest further in their activities.

Worries over the government’s declared intention to further tighten the fiscal framework within which the mining companies operate and a slump in global gold prices have led to new investment in the industry falling to its lowest level in two and a half decades.

It is also the leading generator of foreign exchange, contributing 39 per cent of merchandise export revenues in 2018 and repatriating US$2.8 billion of the US$3.8 billion it earned last year.

Encroachment on mining concessions stands to lower new investment and ultimately lower ongoing production, as was the case with AngloGold Ashanti at the height of its crisis.