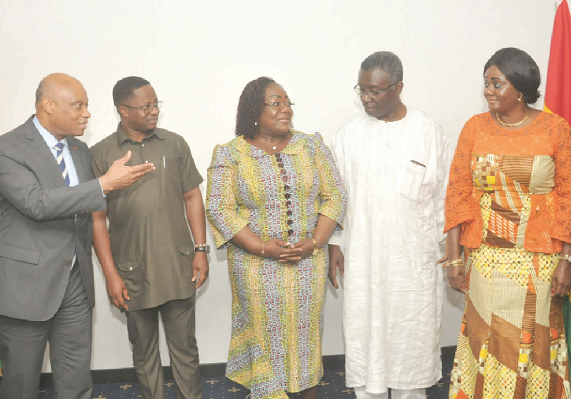 The Technical Experts Sub-committee set up by Ghana and Côte d’Ivoire to come up with measures to tackle the pollution of the Tano-Bia River Basin and its impact on Côte d’Ivoire has presented its report to a ministerial ad hoc committee in Accra.

The report, among others, recommended that both countries had to adopt a programme of activities to deal with illegal mining in the Tano-Bia river basins shared by both countries, with clear timelines.

It also recommended that the activities should begin in July 2017 and end in December 2017 by which time the committee expects that significant strides would have been made to eradicate illegal mining and its impact on the Tano-Bia River Basin.

The report, which also contained a joint programme of action with specific timelines to guide the collaboration, specified actions to be jointly conducted by both countries from July 15 to July 31, 2017.

Such action include the selection, visits and identification of sources of the pollution and the eradication of the sources of pollution by August 15, 2017.

Following the impact illegal small-scale mining (galamsey) in the Tano-Bia River Basin in Ghana was having on potable water supply and fishing in Côte d’Ivoire, the presidents of both countries ordered the setting up of the Ministerial Ad hoc Committee that comprised sector ministers of the two countries to come up with mutually beneficial solutions.

The committee also set up the Technical Expert Sub-committee to facilitate its operations.

The meeting to develop the report focused on the impact of illegal mining activities on both countries and how to mutually resolve the menace.

At the meeting, a three-point agenda was adopted and included the drawing up of a joint programme to control and eradicate the illegal mining activities in the Tano and Bia River basins, among other responsibilities.

Others were to draft the formalisation of the Ministerial Ad hoc Committee and the Technical Experts Subcommittee and draft a term of reference for both committees to operationalise their work.

A representative of the technical committee, Mr Ben Ampomah, who is also the Executive Secretary of the Ghana Water Resources Commission, presented the report to the Ministerial Ad hoc Committee.

In his welcome address at the presentation of the report, the Minister of Environment, Science Technology and Innovation, Professor Kwabena Frimpong Boateng, told the Ivorian delegation that Ghana would address the menace within the accepted time frame.

“Ghana has outlined an elaborate plan to combat the illegality, which we would be partnering with you to do,” he said.

He said Ghana and Côte d’Ivoire had a long standing cordial relationship which Ghana was not ready to compromise, but was poised to enhance that relationship for the mutual benefits of both countries.

Making a contribution, the leader of the Ivorian Delegation, its Minister of Industry and Mines, Mr Jean-Claude Brou, expressed optimism that the collaboration of both countries would help to eradicate the menace.

He assured Ghana that his country would continue to collaborate with the country on issues of mutual concern and expressed gratitude to the Ghanaian officials for the reception accorded the team, which he described as great.

An MOU which will, among other things, make the recommendations of the committee binding on both countries will be signed.

The proposed MOU expects the ministerial committee to meet once a year while the technical committee met twice a year.

The MOU would be binding on both countries for two years.

In March 2017 a news item in an Ivorian newspaper ‘The 'gold rush' polluting Cote d’Ivoire’s drinking water,’ reported how galamsey in Ghana was impacting on water supply in that country.

The report described the Bia River as a vital source of water for the residents of Bianouan in eastern Cote d’Ivoire. “They drink the river water, and they bathe, fish and wash their clothes in it. But all that changed about a month ago, when the river turned a murky brown. Our observers suspect that illegal gold mining is behind the contamination,”

It said the people in Bianouan could no longer use the river for drinking or washing, because it is so polluted, and fishing had come to a standstill.

The news article blamed illegal mining activities in Ghana for the pollution of the water bodies.