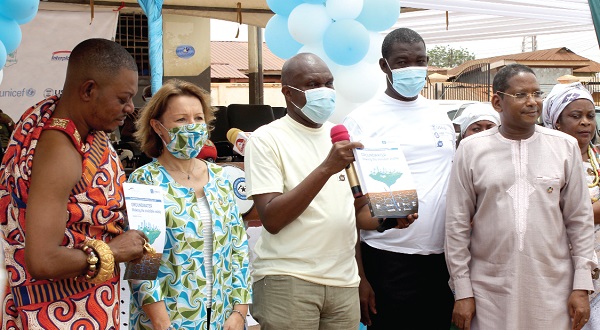 Efforts are being made to realise responsive groundwater policies, actions and services to enhance water sustainability and economic activities, the Minister of Sanitation and Water Resources, Ms Cecilia Dapaah, has said.

As part of the measures, she said, the government was working to improve the knowledge base and understanding of the hydro-geological setting in the country for reliable information on groundwater resources to support water delivery.

This was contained in a speech read on behalf of the minister by the Director of Water at the ministry, Mr Donnan Tay, at the commemoration of this year’s World Water Day in Dodowa in the Greater Accra Region on March 23, 2022.

The commemoration was on the theme: “Groundwater — Making the invisible visible”.

It was organised by the Ministry of Sanitation and Water Resources, in collaboration with the Water Resources Commission and the United Nations Educational, Scientific and Cultural Organisation (UNESCO).

In attendance were traditional leaders, some government officials, members of the Diplomatic Corps, students, among others.

Ms Dapaah expressed concern over groundwater pollution, since, according to her, it took many years to restore the water.

“Groundwater has always shown exceptional resilience to drought and, therefore, the presence of aquifers, with their large volumes of stored water, provides a natural solution to climate change adaptation,” she said.

The minister said there were high levels of fluoride in the Upper East Region, adding: “There are also cases of localised pollution and areas with high levels of iron, fluoride and other minerals, such as manganese, arsenic and iodine, while high saline groundwater is found mostly in the coastal aquifers.”

“It is, therefore, heartwarming to note that the government’s attention is strategically on strengthening capacity in the technical and institutional aspects of groundwater assessment, planning and development,” she added.

According to the minister, the total groundwater production in the country was about 23.8 million cubic metres per year.

That, she said, represented between 0.1 and 1.3 per cent of the annual estimated groundwater recharge.

She said that would provide licences for companies that prospected for and drilled water wells, regulated the use and development of groundwater resources in an environmentally sustainable manner and also gathered information on groundwater availability and exploitation for effective planning and management.

The minister said most of the major commercial water bottle industries in the country used groundwater for production, adding that it constituted about 85 per cent of groundwater use in the Densu Basin alone.

The United Nations Resident Coordinator to Ghana, Ms Anne-Claire Dufay, who doubles as the UNESCO Representative, said this year’s theme was very significant because some people were abusing natural water resources.

Currently, she said, an estimated five per cent of the annual recharge potential was used each year, and that the quality of groundwater in the country mostly met the standards for drinking water.

“Overall, around 41 per cent of households in the country depend on groundwater — this is generally much higher in rural areas than urban areas. This signifies the importance of regulation, protection and harnessing groundwater effectively in the country,” Ms Dufay added.

She commended the government for providing access to basic water for the people.