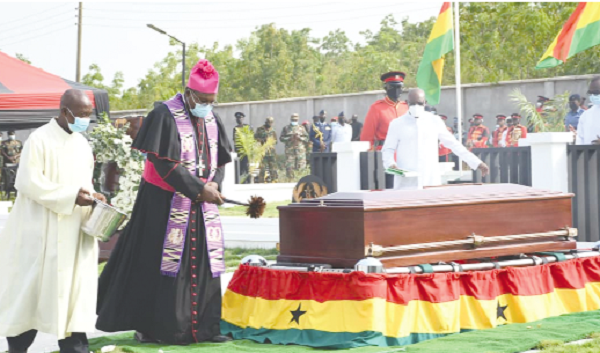 A grateful nation yesterday bid an emotional farewell to the first President of the Fourth Republic, Flt Lt Jerry John Rawlings, whose remains were lowered into their final resting place at the new Military Cemetery behind the Burma Camp.

Accra, the national capital, almost stood still as Ghanaians and the international community came together to say adieu to the 73-year-old former President.

The sombre mood extended beyond Accrato other parts of the country.

It was a fitting honour to the former military leader and democratically elected President, whose towering presence in the politics of the country spanned a combined period of 19 years, the longest by any leader in the country.

The Black Star Square, which hosted the State Funeral before the full military burial, epitomised a dignifying atmosphere of calmness, interspersed with song ministrations and words of inspiration and encouragement and impeccable military performance.

When the ceremony was all over at the Black Star Square, the final lap of his journey to join the ancestors was equally solemn and impressive, as the Ghana Armed Forces (GAF) took over to show respect to the man who was an accomplished pilot with the Ghana Air Force before he became the Commander-in-Chief of the GAF.

With all flags flying at half mast, the casket containing the remains of the late former President, draped in the national colours and mounted on a gun carriage on a cortege, set off from the square at exactly 1:07 p.m. on the journey to its final resting place, the new Military Cemetery behind the Burma Camp.

Amidst tight security and the enforcement of COVID-19 protocols, the sizeable mourners, many of whom sat under the canopies and in the stands, watched proceedings in grief.

Security chiefs, the clergy, members of the Diplomatic Corps, Ministers of State, Members of Parliament, leaders of various political parties and traditional leaders were also present to bid a final farewell to the iconic former President.

Coming from outside Ghana were the Liberian President, George Weah; the President of Sierra Leone, Mr Julius Maada Bio; the Prime Minister of Niger, Mr Brigi Rafini; the President of the ECOWAS Commission, Mr Jean Claude Kassi Brou; the Chief of Staff at the Bureau of the Chairperson of the African Union (AU), Ambassador Abdoulaye Diop, and a former Head of State of the Republic of Benin, Dr Yayi Boni.

At 7:45 a.m., the cortege, led by a motorcade and a mounted squadron, arrived at the Black Star Square with the remains of the former President, which were welcomed with some hymns by a mass choir.

The casket was put on a bier under a canopy decorated with the national colours, Adinkra symbols and some beautiful fresh flowers on the sides.

Military insignia, including the former President’s Air Force cap and the Sword of the Commander-in-Chief of the GAF, were placed on the casket..

Songs reverberated from the mass choir, the National Symphony Orchestra, the Military Regimental Band and the Police Band.

When Elsie Duncan-Williams, a daughter of Archbishop Nicholas Duncan-Williams of the Action Faith Chapel, sang a rendition of Ben E. Kings’s ‘Stand by me’, it moved the widow, Nana Konadu Agyeman Rawlings, to tears, as she was seen wiping tears from her eyes.

Ghanaian Gospel musicians, Joe Mettle and Irene Logan, were also at hand to soothe the pain of the bereaved family and all present with some inspiring songs.

The Methodist Bishop of Accra, who preached the sermon, stirred emotions yet again with the iconic opening words by Mark Anthony at Caesar’s funeral in William Shakespeare’s Julius Caesar:

Nine wreaths were laid, with the first being laid by President Akufo-Addo on behalf of the government and the people of Ghana.

Supported by two family members, the widow laid one on her own behalf, while the children, led by the eldest, Dr Zanetor Agyeman Rawlings, also laid one.

The Regent of Anlo, Togbe Wenya, laid a wreath on behalf of traditional leaders, with Colonel Joshua Agbotui  (retd) laying one for and on behalf of the family.

When the ceremony ended at the Black Star Square, the GAF took over again for the final lap.

The casket was mounted on a gun carriage, with an Air Force helicopter providing escort for the cortege as it moved to Mr Rawlings’s final resting place.

Horse riders were also part of the final drawing out, with one horse without a rider pulled along to signify the sense of loss for the fallen hero, who was himself an ardent horse rider.

The carriage conveying the casket drove through the Osu Cemetery traffic light, the Ridge Roundabout, through the Independence Avenue Roundabout to the Kwame Nkrumah Interchange, joined the Ring Road towards the Ako Adjei Interchange, then to the 37 Military Hospital and then the Burma Camp, the Air Force Base and finally the Military Cemetery for interment.

At the graveside, President Akufo-Addo and his wife joined Rawlings’s widow, children and family, as well as the clergy and other mourners, for the burial rites.

Honouring one of their own, pallbearers from the Ghana Air Force removed the national flag from the casket, and after it had been blessed by the Bishop of the Keta-Akatsi Diocese of the Catholic Church, the Most Rev. Gabriel Edoe-Kumordji, the casket was lowered into the grave.

At that moment, face masks came to the rescue of many of the guests, as they could not be seen shedding tears, as the scene became very emotional.

Afterwards, there were three-volley shots salute and a 21-gun salute, while another helicopter flew past and the last post was sounded.

The Director of Religious Affairs of the GAF then presented the insignia to the former President’s son, Kimathi Agyeman Rawlings.