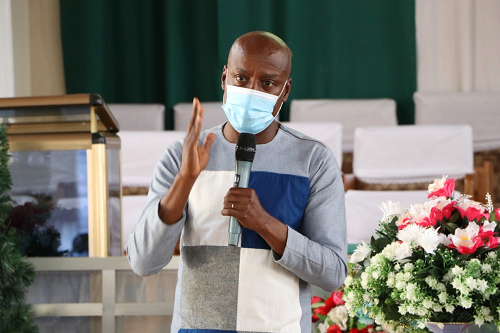 At a stakeholder review meeting held last Tuesday (August 3, 2021) at Nkawkaw with all government agencies and departments, he said the vision of making the Assembly the best in the country would emanate from the sustainability of the projects initiated by various departments and institutions in the Municipality, as well as eliminate errors in undertaken some projects in the Municipality.

The MCE cited that government agencies such as Ghana Water Company Limited, Electricity Company of Ghana, and Ghana Highways Authority would often need to collaborate to avoid misunderstanding or blame when any of them is undertaking a project for the development of the area.

He said there were instances of some state institutions encroaching portions of roads constructed for the purposes of laying underground pipes for water extension or erection of poles for extension of electricity without factoring the GHA or urban roads, which in effect left the road in a bad state and vice versa.

Such challenges he said could be easily resolved if institutions collaborate more with each other.

"We want to eliminate that blame game between state agencies, and collaboration is key to that effect. Issues relating to encroachment of portions of roads for laying underground pipes or erecting electricity poles for the extension of some basic social needs and vice versa must be avoided in the sustainability of projects undertaken."

"If the GHA, Feeder Roads or Urban Roads wants to undertake a project, there should be a collaboration with ECG and GWCL to access whether there would be a need for an underground pipe to be laid. So that it is done as part of the project for future work instead of GWCL or ECG coming to dig trenches in the roads to lay underground pipes years later. It doesn't help in sustainability and duration of the constructed road," he said.

He added there is the need for a continuous review meeting among state agencies in the Municipality; so that some common errors that impede developments are alienated.

Mr Owusu Addo lauded the government agencies and NGOs for their contributions towards the development and performance of the Municipality in recent times which placed the Kwahu West Assembly as one of the best performing Assemblies across the country.

He said the Kwahu West in a recent league for Metropolitan, Municipal, and District Assemblies (MMDAs) released by the Ministry of Local Government and Rural Development indicated that Kwahu West was the fifth best performing Assembly out of a total of 260 across the country, and the best in the Eastern Region.

He added that the exploit was bent on the efforts among various government institutions and agencies, as well as NGOs in collaboration with the assembly in achieving some expected targets of the government in the Municipality.

He urged various government institutions and agency heads to make the league result a springboard to strive in maintaining the Assembly as number one in the region and climbing to the zenith in the country.

He urged agency heads to continue to review their internal strategies and adopt creative methods relevant to the development of the Municipality, to achieve their annual targets.

He appealed to the citizenry to be more patriotic in the payment of their taxes to help the assembly realise the needed funds for the numerous developmental projects on its table.