Cohesion, love must prevail at all times — Prof. Kofi Agyekum 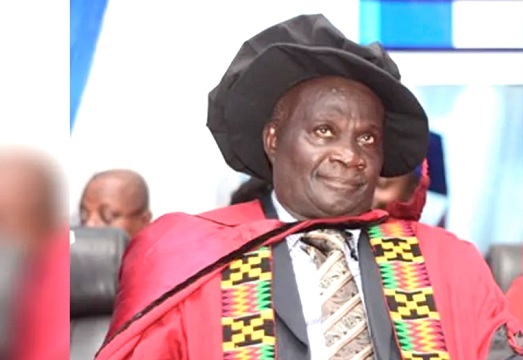 Ghana is a communal society and we all have a responsibility to ensure that cohesion and love prevail at all times.

We should also learn how to forgive and forget, and it’s important that when somebody, be it a brother, sister, friend or colleague, offends anyone and renders an apology, that person accepts and puts it behind him or her.

A professor of Linguistics at the University of Ghana, Legon, Professor Kofi Agyekum, told The Mirror in an exclusive interview that as part of our linguistic routines or respect systems, and to make sure that the communal ties were maintained, when people offended each other, they should be ready to apologise.

Prof. Agyekum however noted that an apology was fake if it was not coming from the innermost part of the heart of the person rendering it, and it was also not complete until it had been accepted by the offended in good faith.

“Anytime one renders an apology to an offended, the person must accept the offence. In between rendering the apology and acceptance, there’s something called sincerity condition and anything short of this is not an apology”, he explained.

Prof. Agyekum, who is also the Dean of Performing Arts at the University of Ghana, noted that “because of our communal system, when you forgive, it should be whole, if not, then it’s not an acceptance. If that happens, it means that the apology is hanging and it has not landed on the offended,” he emphasised.

The offended person should not say he or she has accepted the apology and yet will not forget about the incident or the offence, while still harbouring that ill feeling, a situation, which is likely to create tension and suspicion and will not create a positive environment, he stressed.

Christmas get-togethers
Prof. Agyekum told The Mirror in the interview, which coincides with the period ushering in the festive season, Christmas, that it is a time to show love and to forgive, as well as a period when families get together, solve problems, make reconciliations, have fun and plan for the future.

The season, which is also used to celebrate the birth of Jesus Christ, also draws our attention to the need for us to be humble and care for one another.

Prof. Agyekum reminded us about our kind of system or society, which is not individualistic or personalistic, but rather, collectivist and anti-personalistic.

He observed that in other cultures, which are individualistic, you may be living in flats next to one another, such as Flat 1, Flat 2 and Flat 3, yet you would not know the person living next door, though you’ll all be on the same block.

It’s important to know who lives next door, because should anything happen to one of you, it’s the neighbour next door that you’ll call first, or who will come to your rescue.

In our system, one person’s problem was a problem and that is why, for instance, we travel long distances to attend funerals.

It was also along the same lines that when you are with people, either at home or at the workplace, and you’re going somewhere, you tell them and once you return, you let them know.

You live with people and you are travelling, but you will not tell them.

Those days, when people were travelling outside the country, families and friends went to the airport to see them off.

Communal eating
Prof. Agyekum, who is also known as Opanyin Agyekum, recalled the practice where families lived in compound houses and would cook and eat together, a practice we call communal eating, and even when a child’s mother was not in, that child would be given food by others in the house.

Once food was ready, mothers or relatives who prepared the food, would invite the others to eat.

He said one didn’t need to give prior notice to a relative or friend before visiting, and even when the family or friends you visited didn’t know you were coming over, they still would serve you food.

He said in those days, anytime families cooked, they made provision for a visitor who might just walk in, and that was the family conscience we had; one of the family values.

All those practices brought the children in the communities and families together, so as they grew, they took all the temperaments of others and they learnt how to live with one another.

These days, we are breaking away from that.

Appreciation
Prof. Agyekum noted that the youth of today did not even show appreciation when their parents did something for them, because they saw it as their responsibility and said it was only proper that they showed appreciation.

He recalled that in some cultures, when parents provided children food, they thanked them.

“Those days when a man buys a machine or cloth for the wife, a whole family delegation will go to the man’s house early the next morning to thank him”, he added.

He regretted that we’ve lost a lot of our family values, but have been able to maintain thanksgiving and funerals.

Those days, a delegation would go to the next village to go and say thank you.

Advice
As part of our family system, people are expected to offer advice freely, he pointed out, adding that in the communal society, if you had an issue, you approached an elder for advice, and it could be on any issue.

The belief, he noted, was that no matter who you were, at one point in your life, it was believed that you would need some form of advice.