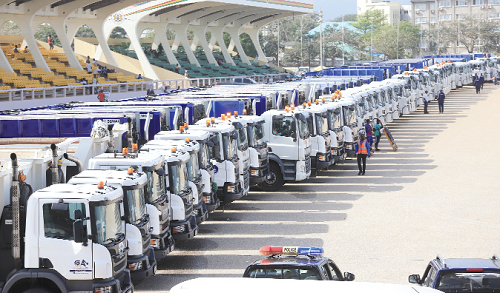 A line up of sanitation trucks at the Independence Square after the launch of the Make Accra Clean Project by President Akufo-Addo. Picture: SAMUEL TEI ADANO

"Operation Clean Your Frontage”, a sanitation initiative to rid the Greater Accra Region of filth and green portions of the environment to enhance its aesthetic beauty and improve health, has started.

The initiative will deploy the use of multiple approaches such as campaigns for attitudinal change, enforcement of bye-laws and logistics to drive residents not only to keep their immediate surroundings clean, but beautify them.

The campaign makes it mandatory for property owners of residential, private and public institutions and the citizenry to clean and green their frontages and all open spaces around their property.

Already, bye-laws for the enforcement of the campaign have been passed, officers employed and trained to enforce the bye-laws, including the arrest and prosecution of offenders.

However, a moratorium of two months has been placed for public education before enforcement of the laws begins.

Waste management company, Zoomlion Ghana Limited and the lead partner of the initiative, is providing 1,000 containerised motor tricycles and 58 compactors to be distributed to the 29 metropolitan, municipal and district assemblies (MMDAs) in the region to support the project.

The equipment and logistics were all on display at the event ground.

President Akufo-Addo said the increasing population of Accra and the challenge of sanitation could “be overcome not just by the logistics and the bye-laws and the rules of engagement but also by a change in our attitude and behaviours”.

The President, who described himself as “an Accra boy” because he was born in Swalaba and grew up in Korle Woko, Adabraka and Nima, all suburbs of Accra, said at independence, Ghana’s population was six million, with Accra having a population of 200,000.

However, the latest population census indicated that Accra was occupied by five million people, with the nation’s population shooting up to 30.8 million.

That, President Akufo-Addo explained, was an indication that the challenge facing the city about utility services and sanitation required a change in attitude and behaviours in addition to the use of logistics, bye-laws and spelling out rules of engagement.

It was for that reason he indicated in the beginning of his first mandate that he would ensure that Accra became the cleanest city in Africa, the President pointed out.

The launch of the campaign was, therefore, an essential step to make the commitment a reality, he added.

President Akufo-Addo urged all stakeholders within the region to lend their support in ensuring that the campaign was successful to make Accra clean and beautiful.

He commended all those who had helped in diverse ways to make the launch of the programme a success, including Members of Parliament (MP) from the opposition National Democratic Congress (NDC).

The campaign will include the deployment of City Response Team, the evacuation of accumulated refuse at sanitary sites and other locations, and from transfer stations in MMDAs.

Concrete bins will also be located on major highways, while the desilting of public drains, weeding of road medians, greening of public open spaces, road medians and road shoulders would be undertaken with periodic painting of kerbs on ceremonial streets.

President Akufo-Addo described the day as “a very good day in the life of Accra” because for the first time in 20 years, he was able to go and visit the lawfully installed and officially gazetted Ga Mantse in his Palace.

He thanked God for the development that all the squabbles and disputes about who should succeed Nii Amugi had come to an end to pave the way for “this fine young man as a new Ga Mantse”.

The President urged all to lend a hand to make his reign a success.

The occasion brought together some ministers of state and other government officials, chiefs from the Ga Traditional Council, led by the Ga Mantse, King Tackie Teiko Tsuru II, and other religious groups.

The gathering was thrilled by musical performances from Ghana Police Band and cultural displays from some cultural troops.

There was also a short drama performed by the City Response Team to raise awareness of the negative effect of plastic waste on the environment and how the challenge could be addressed.

Prior to that, he said, a two-month moratorium would be offered for public education as well as mass sensitisation.

In addition to the project, Mr Quartey said the Greater Accra Regional Coordinating Council (GARCC) was making concerted efforts to green and beautify the region.

He said the council was partnering the Forestry Commission and other private entities for the greening and beautification of open and public spaces within the busy districts.

Areas that would be affected in the first phase of the project, the minister said, were the Ayi-Mensah to Ridge Roundabout and the back of the Novotel Hotel, Kofi Annan International Peacekeeping Training Centre in Teshie to the Accra Sports Stadium, the AU Roundabout; Ridge Roundabout; Danquah Circle and the Akufo-Addo Roundabout.

While describing the “Clean Your Frontage” initiative as very laudable, the Executive Chairman of Jospong Group of Companies, Mr Joseph Siaw Agyepong, pledged the support of all private sector waste management players to the success of the project.

He further gave the assurance that they would continue to offer their support to the Greater Accra Regional Minister in his efforts to make Accra the cleanest city.

Mr Siaw Agyepong said the initiative would make Ghanaians more responsible in ensuring that their immediate surroundings were always clean.

That, he said, would also offer service providers more space to take care of domestic waste collection at public places and street cleaning.

Since the inception of Zoomlion, a subsidiary of the Jospong Group, in 2006, it had made tireless efforts to help improve the country’s sanitation, Mr Siaw Agyepong stated.

However, he pointed out that after several years of his company’s operations in the sanitation space, negative attitudes of citizens towards the environment and the lack enforcing sanitation bye-laws were two key challenges inhibiting a sustainable clean and healthy environment.