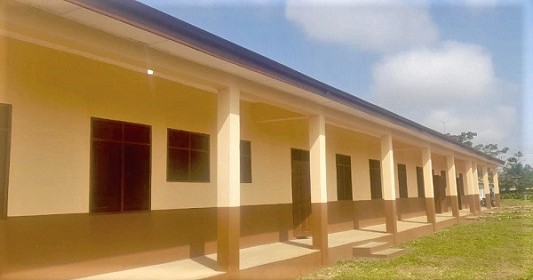 A three-classroom block constructed for the Ahmadiyya Junior High School at Fiapre in the Sunyani West Municipality at the cost of GH¢321,161 has been inaugurated.

Attached to the block is a staff common room, an office and a storeroom.

In addition, all the three classrooms have been provided with furniture for students and their teachers, as well as ceiling fans to ensure the comfort of teachers and the learners.

The facility was constructed by the Sunyani West Municipal Assembly with its share of the District Assemblies Common Fund and from other sources.

Before the construction of the facility, students of the school had to use part of the classrooms of the Fiapre Ahmadiyya Primary School, while the teachers had to sit under a nearby tree to mark class exercises.

It was, therefore, a time for merriment for both students and staff, when the Sunyani West Municipal Chief Executive, Evans Kusi-Boadum, jointly inaugurated the facility with the Chief of Fiapre, Obrempong Professor Kyem Amponsah, last Monday.

In his address before the inauguration of the block, Mr Kusi-Boadum commended the Ahmadiyya Mission for its interest in formal education in the country.

He stated that the establishment of both first and second cycle schools by the Ahmadiyya Mission had provided excellent education for the youth in the country.

"It is gratifying that Muslims are now combining formal education with the studying of the Qur’an", Mr Kusi-Boadum said.

He expressed concern about the use of classrooms in the municipality by miscreants for their nefarious activities.

He said security personnel had mounted surveillance in the affected schools and warned that those who were caught indulging in such unpatriotic behaviour would face the full rigours of the law.

For his part, Obrempong Amponsah thanked the assembly for the provision of the facility and urged parents to team up with teachers for the proper upbringing of their children.

He explained that beside the University or Energy and Natural Resources as well as the Catholic University of Ghana, the community had provided a land for the establishment of a Science, Technology, Engineering and Mathematics Senior High School by the government.

He announced that the Fiapre Traditional Council had decided to institute an education ­festival, to encourage people in the area to appreciate the importance of education.

Obrempong Amponsah, who is also the Vice Chancellor of the Ghana Technology University in Accra said an endowment fund had been created to mobilise resources for the construction of a community library and ICT laboratory, to enable pupils and students to have a place to study.

He added that a free vacation classes programme organised and funded by the traditional council had led to the improvement in the results of students who sat for the Basic Education Certificate Examination in the area.

For his part, the Headteacher of the school, Sadique Bin Mahdi, thanked the Sunyani West Municipal Assembly for its gesture and pledged that the facility would be properly maintained at all times.