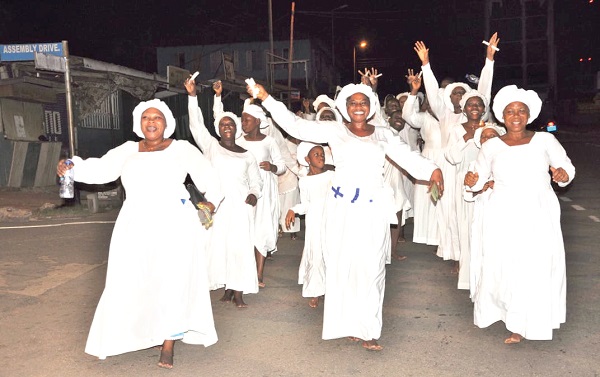 Christians last Sunday marked Easter Sunday with special services, prayers and thanksgiving to commemorate the resurrection of the Saviour, Jesus Christ, after his crucifixion.

From Orthodox churches through to charismatic ones, Easter Sunday services were enthusiastically participated in by worshippers, most of whom were dressed in all-white to signify Jesus’ victory over death.

Preachers encouraged people to build their faith and be hopeful for new beginnings, just as the resurrection of Christ signified.

It was the first time in two years that Easter celebrations had been held in-person, after two years of COVID-19 pandemic restrictions and cancellations.

“That is why we will not stop singing, dancing or rejoicing because we have been redeemed,” he added.

During the mass, 22 people were baptised, seven received first holy communion, while seven were confirmed.

From the St John the Evangelist Catholic Church at Adenta, Kwadwo Baffoe Donkor reports that it was all joy for the parishioners to celebrate the resurrection of Christ as one family.

In his homily, the Assistant Parish Priest, Rev. Fr Dominic Amanor, implored Christians to let go of the past and embrace the resurrected Christ.

The Women’s Fellowship of the Kaneshie Congregation of the Presbyterian Church of Ghana carried on with the tradition of going round the community, singing: “Jesus has risen! Death could not hold him captive.”

Some of the congregants of the Holy Apostolic Reformed Church of Ghana  dancing during praise and worship. Picture: Maxwell Ocloo

In his sermon, the Kaneshie District Minister of the PCG, Rev. Dr George Opare Kwapong, encouraged Christians to persist in the Christian life, so that they would have impactful encounters with Christ, just as Mary Magdalene had when she persevered and went looking for Jesus in the tomb after His crucifixion and burial.

“We should strive to know Christ better and have a better relationship with Him, as that is the fulcrum of the ultimate sacrifice and the true meaning of Easter.

Every aspect of our lives should reflect the sacrifice, the crucifixion and the victory of His resurrection, so that we can work on our salvation,” he emphasised.

The Presiding Bishop of the Lighthouse Chapel International, Bishop Dag Heward-Mills, in a statement, encouraged Christians not to allow adversity to come between them and their faith in God.

Bishop Heward-Mills said challenges were part of life, and that as children of God, Christians must not think that they were immune to such difficulties.

The Man of God, who lost his eldest son, a doctor of psychiatry, in the US last Thursday, stressed that the response of Christians to adversities must be Godly and “anchored on their belief and faith in God, as that will help distinguish them, strengthen and entrench their Christian faith, as well as encourage others to serve God”.

Alberto Mario Noretti reports from Ho that some churches and youth groups took part in street processions at dawn on Sunday to celebrate the Resurrection of Christ.

Among them were the Akorfafanami Church and the Celestial Church of Christ.

The celebrants sang songs of joy, announcing that “Jesus has risen, leaving his tomb empty”.

At the Ho-Kpodzi Dela Cathedral of the E.P. Church, Ghana (EPCG), some members of the congregation waved white handkerchiefs, while others took part in free-for-all dance sessions to celebrate Jesus’ victory over death.

The Moderator of the General Assembly of the church, Rt Rev. Dr Lt Col B.D.K. Agbeko (rtd), entreated the citizenry not to escape from challenges in life but rather face them boldly and break through every difficulty in faith and wear the victory crown in the end.

Preaching the sermon at the Tamale East Church of Christ, the Head Pastor, George Dassah, asked Christians to use the death and resurrection of Christ as a lesson and repent, reports Mohammed Fugu.

He said Jesus Christ left a legacy after sacrificing His life to save mankind, an example all His followers must emulate.

Amidst singing and dancing with joy and gladness, church members in the Bolgatanga municipality praised and worshipped the Lord for sacrificing His life for the sins of mankind and granting them salvation, writes Gilbert Mawuli Agbey.

The churches also held special prayer sessions to thank God for His protection, in spite of the difficulties they went through on a daily basis.

Speaking on the theme: "Rise with the Lord", the Parish Priest of the St Cyprian's Anglican Church, Rev. Fr Camillus Ababagre, admonished Christians to wake up from their slumber. as the Lord had risen and changed their lives.

He said the rising of the Lord and Saviour Jesus Christ called for a total transformation of the lives of Christians.

From Cape Coast, Edith Mensah reports that churches in the metropolis held church services on Good Friday and Easter Sunday.

Preaching the sermon on Easter Sunday, the Cape Coast Area Head Pastor of the Christ Apostolic Church International, Rev. David Biney, urged Christians, particularly the youth, to sacrifice and dedicate themselves to the country's growth.

From Koforidua, Haruna Yussif Wunpini reports that the St George Cathedral was filled to capacity with worshippers praying to God for long life and prosperity.

The Catholic Bishop of the Koforidua Diocese, the Most Rev. Joseph Afrifa-Agyekum, urged church members to shun occultism and worship God.