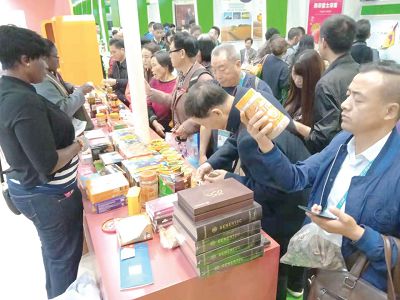 Ghana's participation in the China International Import Exposition has offered the opportunity for three export products to meet the needs of Chinese consumers.

As a first step, an online and e-commerce firm, More Foods, which distributes all manner of snacks across China, has expressed interest in selling Ghanaian snacks in China and agreed to come to Ghana and meet producers of selected products on requirement for the Chinese market.

Most Chinese visitors to the Ghana Country Stand who tried shea butter creams expressed interest in the product and enquired where they could get some of the products to buy in China.

They pointed out that long after using the cream, it remained on their bodies and they considered the cream a better natural cream than what they had seen on the market.

Another product that won the hearts of Chinese visitors was cocoa liquor, particularly Takai, which was highly patronised.

Responding to the enquiries made by some investors about the products and in reaction to the keen interest shown by the visitors, a Deputy Minister of Trade and Industry, Mr Carlos Kingsley Ahenkorah, said Ghana could realise about $50 million from exports from the three products annually.

He said assistance would be sought from the Chinese Embassy in Accra and the Chinese Food and Drugs Authority, to educate and train exporters on quality and health standards.

He said some Chinese ministers of state and the Deputy Mayor of Shanghai, who visited the Ghana Country Stand, expressed delight at what they saw.

He appealed to Ghanaian manufacturers and entrepreneurs to invest towards participation in the exposition next year since it would offer great prospects for a diversity in exports and change the structure of Ghana's balance of trade and payment with China.

Mr Ahenkorah said the Chinese government believed in the efforts by Ghana to diversify her exports and that was why the country was invited and supported to participate in the maiden event.

He expressed delight about the awareness created at the exposition and commended all the participants for making Ghana proud.