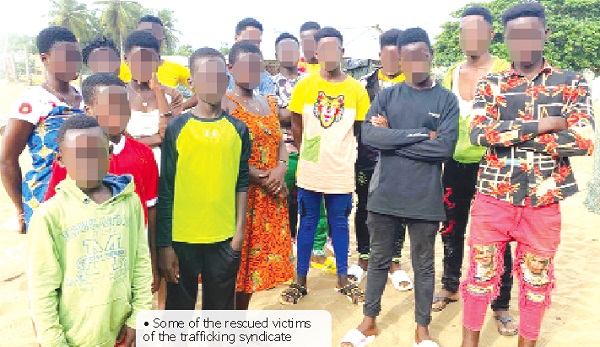 The Ghana Immigration Service (GIS) has busted a syndicate that is allegedly involved in the trafficking of children (minors) across Ghana’s western border for the children to engage in forced fishing activities in Cote d’Ivoire.

Four men, believed to be members of the syndicate, were arrested last Tuesday as they tried to send some minors across the border at New Town in the Western Region for a nine-month fishing expedition in Cote d’Ivoire.

About 16 children, some as young as nine years, were last Tuesday rescued from the traffickers after the arrest of the four syndicate members.

The children, recruited from coastal towns such as Biriwa and Apam Dogo in the Central Region, were making the journey without the consent of their parents, while others had been sold off by their parents for monetary gain.

Giving details of the September 13 arrest, the arresting officer, Assistant Superintendent of Immigration (ASI) Ebenezer Kuntou Asare, told the Daily Graphic that the GIS received a tip-off from some Customs officers about a group of young people trying to cross the border at an undesignated point.

GIS officers on duty quickly moved in to march the travellers to the New Town Border Post, where they were profiled.

He said when the group was interrogated, the gang leader, Kwame Tawiah, confessed that he was leading the group to cross the border to engage in fishing activities in Cote d’Ivoire, but maintained that they had the consent of some of the parents of the children involved.

However, further interrogation of the children revealed that the parents of some of them were not aware of any such trip.

He also indicated that the children had been coached to lie about their ages, but after “profiling”, it was established that they were minors.

He said after extensive interrogation, it was established that the children were going to be given to fishers (masters) in Cote d’Ivoire to assist in fishing activities.

ASI Asare said the traffickers had been operating for some time and were already gaining roots along the border.

“My first encounter with them took place last year, but other officers have had separate encounters with some of them,” he said.

He said three of the boys who were between 14 and 16 years confessed that they had been sent across the border last year to engage in fishing activities, and that they were paid GH₵1,900 after nine months.

“They had returned to their hometowns to help recruit other young people and were on their way back to their base in Cote d’Ivoire when they were intercepted,” the officer explained.

The culprits are presently in the custody of the Half Assini Police, while the children have been handed over to the Social Welfare Department.

The Social Welfare Officer in charge of Half Assini, Benjamin Adu, told the Daily Graphic in a telephone interview that the rescued children would be kept in a secure shelter away from their hometowns to prevent them from falling victim to the traffickers again.

“They are all from the Central Region and so when they were intercepted, we contacted the Social Welfare officials there and they came for the children, but we don’t want them to go back to their hometowns so they are being held in a shelter,” Mr Adu said.

Human traffickers are becoming more organised and tend to target vulnerable parents and communities to facilitate child trafficking in the fishing industry in Ghana and other West African countries, including Cote d’Ivoire.

A United States Trafficking in Persons (TIP) Report 2021 on a study of the prevalence of child trafficking in selected communities in the Volta and the Central regions indicated that traffickers had subjected children from nearly one-third of the 1,621 households surveyed to forced labour, primarily in inland fishing and forced labour in domestic work.

The traffickers force boys as young as five years to work in hazardous conditions, including deep diving and mending of fishing nets, while girls perform work on-shore, such as cooking, cleaning fish and preparing fish for the market, while they are also vulnerable to sexual abuse.

Alarmingly, countries in West Africa tend to detect more trafficking victims than those in sub-Saharan Africa, according to the United Nations Office on Drugs and Crime (UNODC) Fifth Global Report on TIP conducted in collaboration with the National Agency for the Prohibition of Trafficking in Persons (NAPTIP) last year.