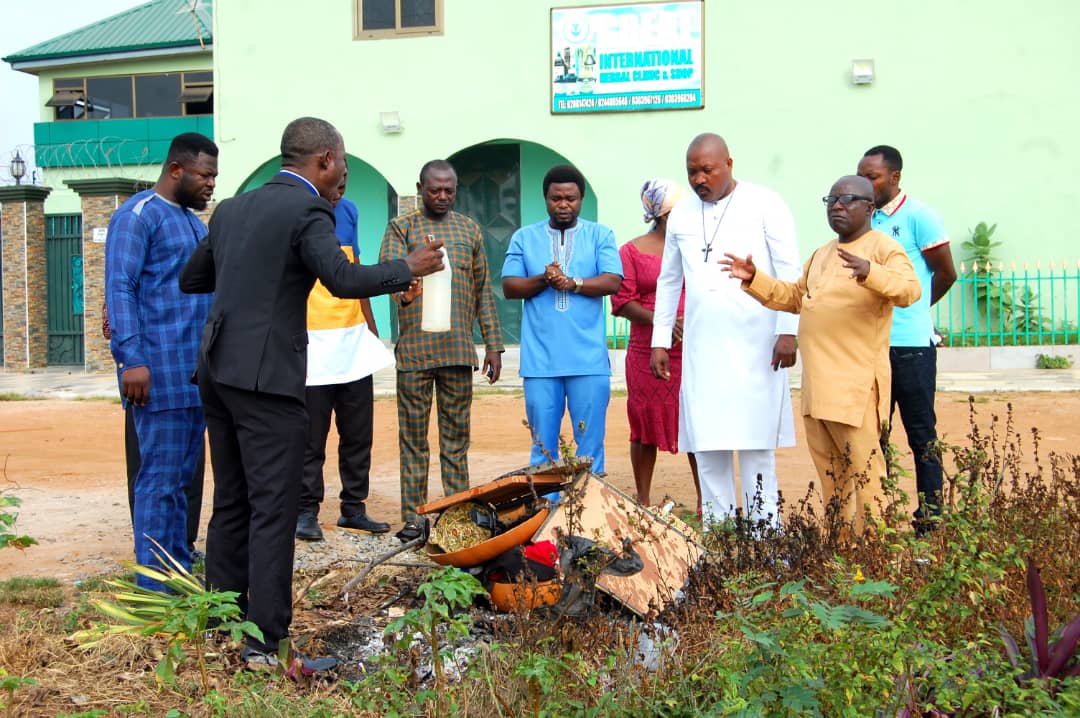 Just like the biblical Saul who encountered Christ on his way to Damascus, became a follower and turned to Paul, a renowned spiritual scientist and traditionalist, Professor Togbui Amuzu, has given himself to Christ as a born again Christian.

Togbui Amuzu who has been the priest and servant of 77 gods, burnt them to ashes and through the tutelage of some Christian leaders gone through the mill to become a Prophet of God.

The destruction of the age-old gods transferred to him by his great grandfather, was carried out in front of his Gbetsele residence near Michel Camp in the Ashaiman Municipality in the Greater Accra Region. 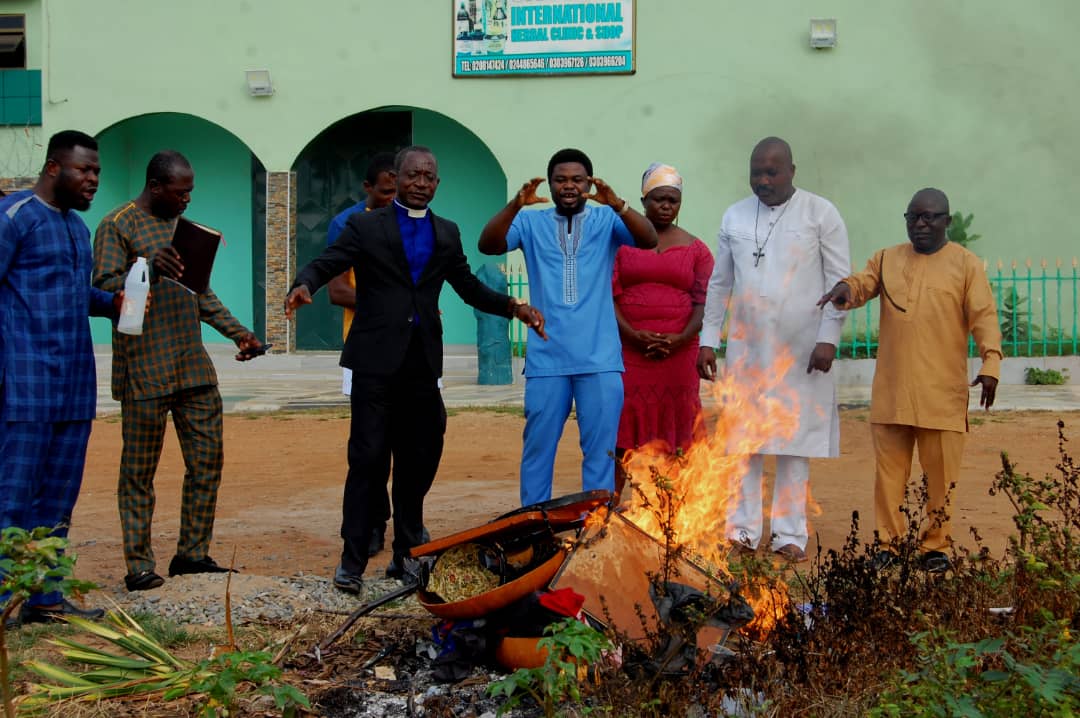 Togbui Amuzu, who took the decision after he had had several dreams of caution from God Almighty to mend his ways, preach and win souls for Christ was assisted in the process by Pastors and Evangelists led by Apostle Paul Asare Agbebo, Founder and Head Pastor of the Living Word Teaching Ministry at Ashaiman Roman Down.

Togbui Amuzu was baptised in the Atlantic Ocean around the Sakumono beach in Accra last Saturday and christened Prophet Paul Amuzu.

This is in fulfilment of the prophetic vision that came with Togbui Amuzu to turn to the Lord and move away from nearly three decades of practicing in the spiritual realms as the mouth piece and priest of the 77 gods.

Togbui Amuzu, who has three decades of experience as a chief priest had travelled and practised extensively as a messenger around the world to countries such as Togo, Benin, United Kingdom, Canada, Spain and the US among others. 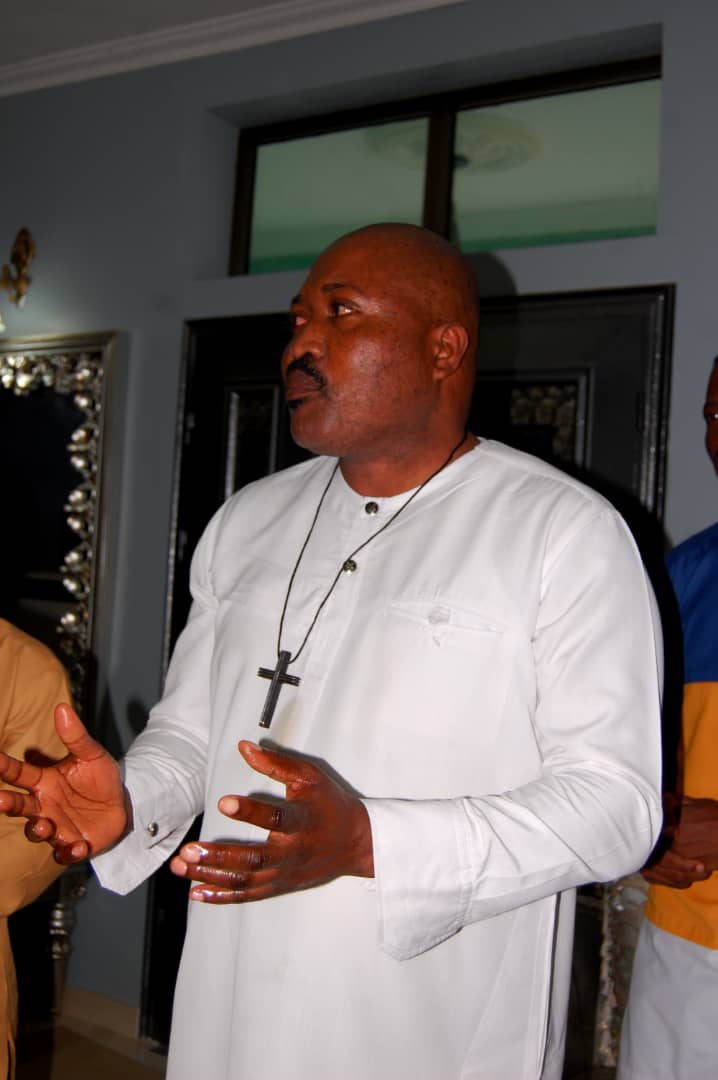 Prayers, songs of praise, words of exhortation and some anointing service preceded the supervised burning of the idols, magical powers and their related regalia.

Some of the items were earlier destroyed by Professor Togbui Amuzu himself in preparation towards this latest final exercise.

Speaking to journalists, Apostle Paul Asare Agbebo noted that the decision by Professor Amuzu to accept Christ as his Lord and personal savior and also use His Kingdom to serve and save mankind was not only in the right direction but also a prophetic dream come true.

He described Prophet Amuzu as a humble, loving and caring as well as a true man of God, adding that the seed of his love for God and His creation was already destined in him while practicing his career as a traditionalist over the years. 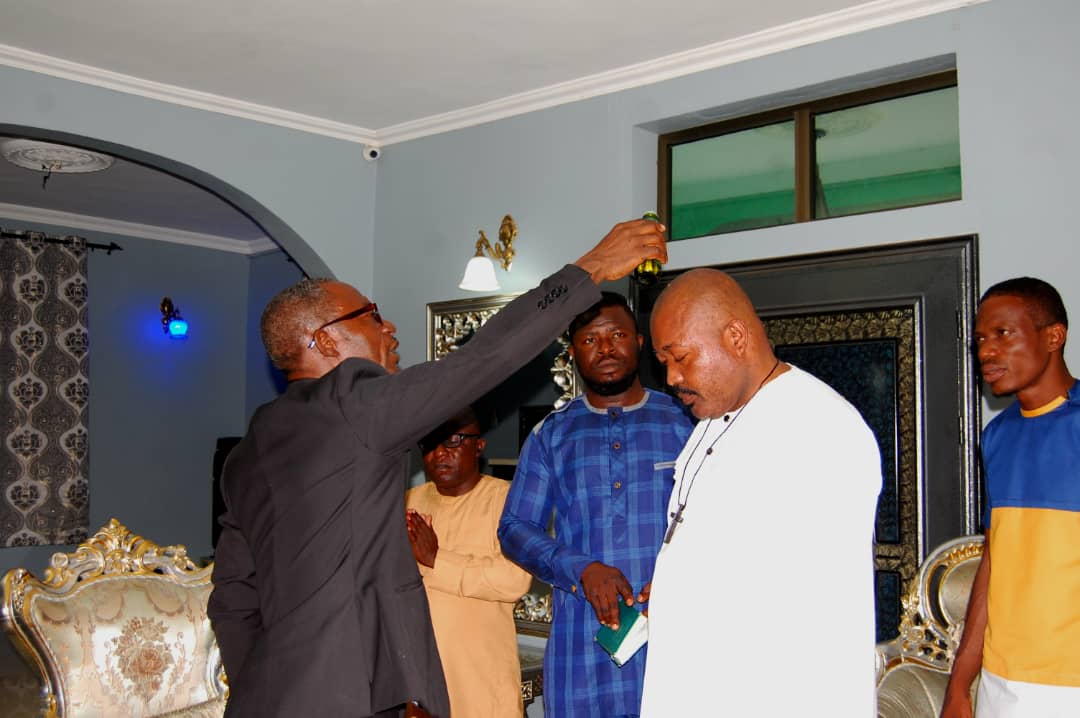 Prophet Amuzu described his journey into salvation as challenging because in the last four (4) years he had had several encounters with God and the need for peace and love for God’s people.

“I also came face to face with God who created man from the spiritual realm from the soil and bequeathed it with oxygen to give meaning and life to it as we can see today', Prophet Amuzu revealed.

He said it was revealed to him that he should strive to make a difference in the lives of a lot of people just as the Lord did in the case of Israel and her people in the Bible. 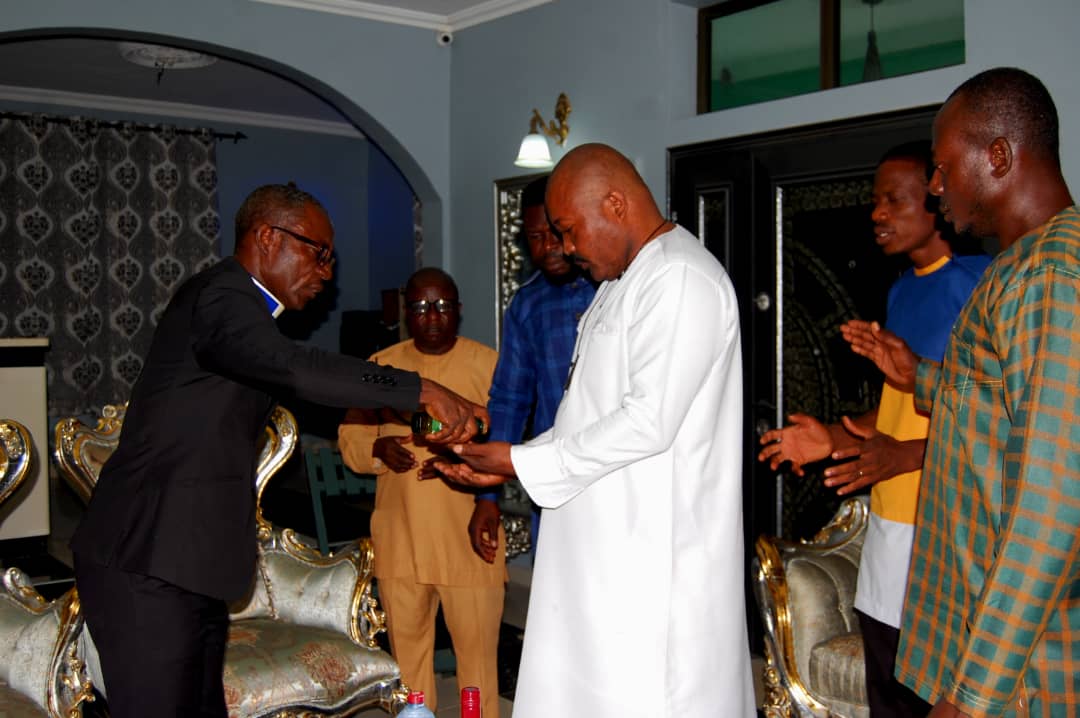 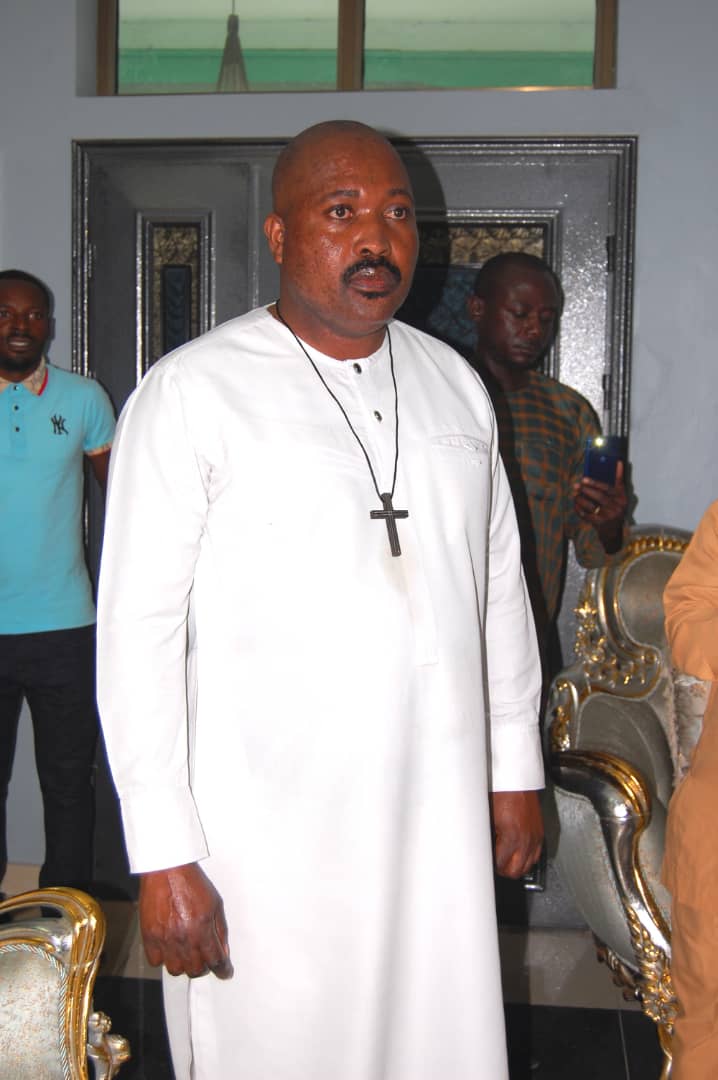 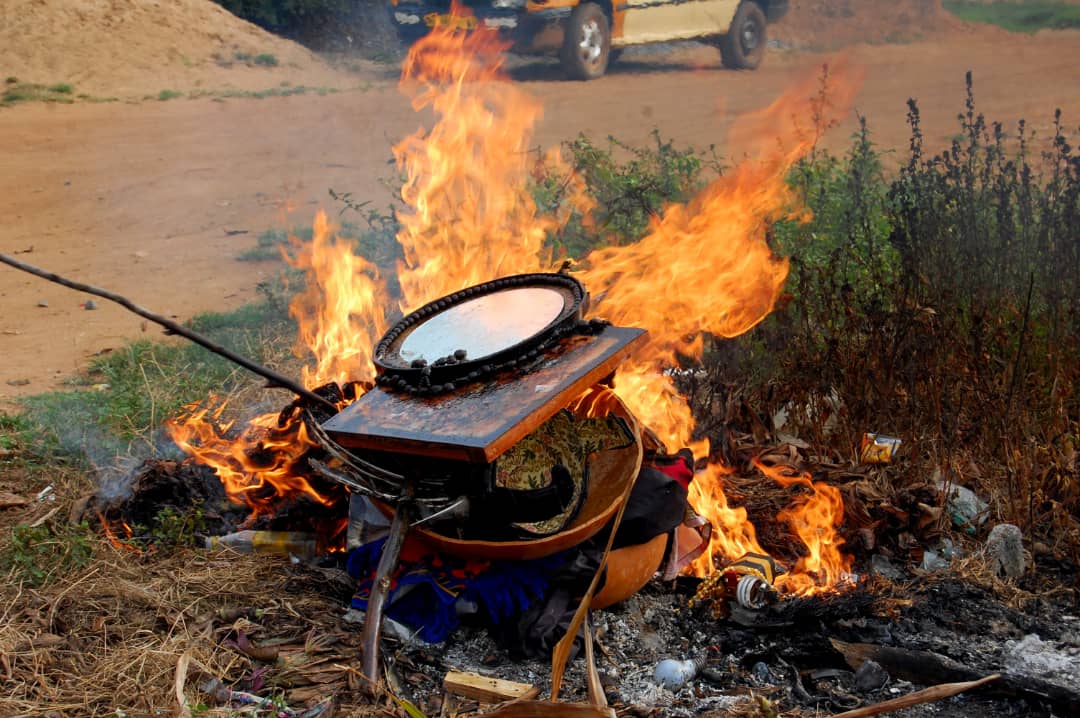 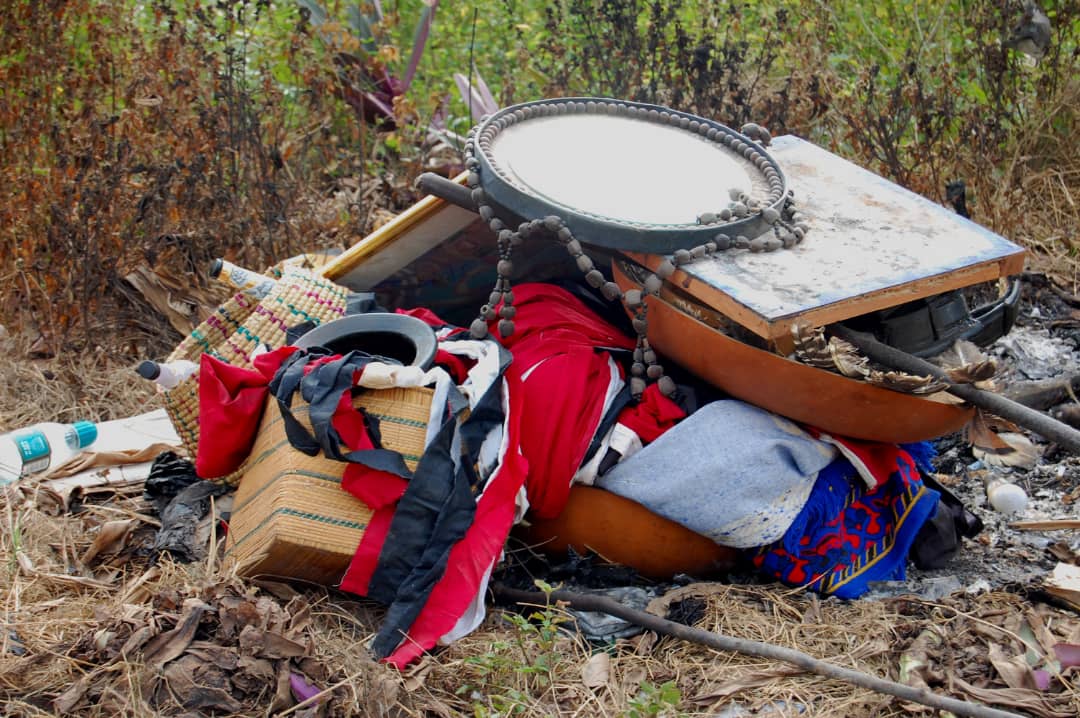 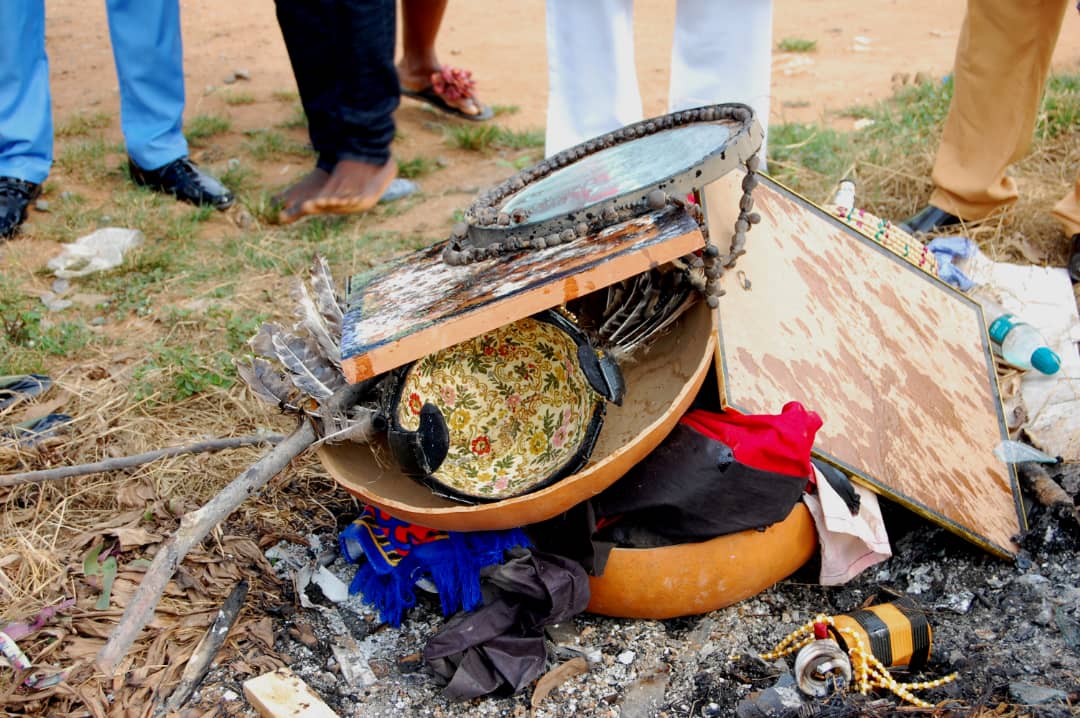