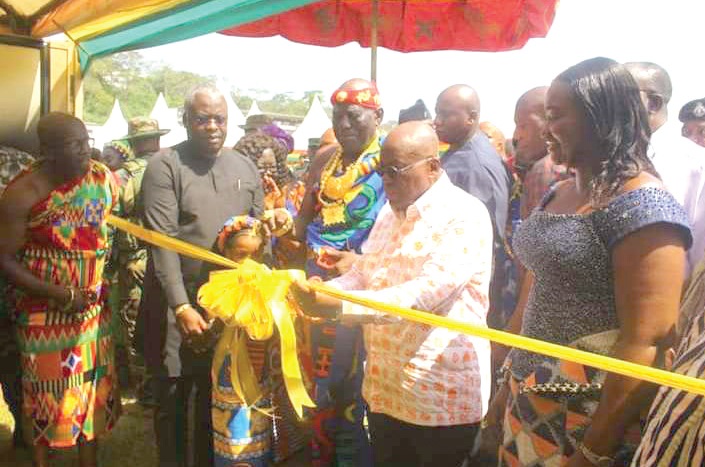 Of the many things that the year 2022 was to the people of the Central Region, the year brought a renewed energy for the people to push the region’s development forward.

This was after the Ghana Living Standards survey of 2016/2017 estimates in 2021 put the Central Region as the fourth richest of the 16 regions.

This was a sharp move for the region from surveys that put the region at the fourth poorest in 2006.

The region, according to the survey’s estimates in 2021, is also the most productive region per capita and the third in terms of per capita income levels for people engaged in farming, fishing, fish processing, public work and trading.

The Central Regional capital, Cape Coast, became the seat of almost all national celebrations this year.

Its Regional Coordinating Council (RCC) took almost all the celebrations in the country this year.

On the back of successfully hosting the 2021 Farmers Day, the region had the opportunity to host two major national programmes, the 65th independence anniversary celebrations in March and the National Festival of Arts and Culture (NAFAC) in December to the admiration of all.

In the area of health, the Enterprise Group PLC refurbished the Sangmuah Male Ward and the courtyard of the Ankaful Psychiatric Hospital at Ankaful.

The project undertaken at the cost of GHS2,026, 986.00 included the renovation of the four-block facility with five wards, a conference room, a pantry, a dining area, a treatment room, two nurse stations and other ancillary facilities.

The region had its share of gruesome crimes, distasteful for its residents.

Three persons including the Tufuhen of Ekumfi Akwakrom, Christopher Clark Quansah, Michael Darko, a self-styled pastor and Jonathan Obeng, a mason, were arrested for the roles in the horrifying murder of Georgina Aso Botchwey, a prospective student nurse.

Initial police investigations indicated that Ms Botchwey had come to Cape Coast from Yeji for admission into the Ankaful Nurses Training College but was lured and abducted by Darko who is also a fiancé of her sister to Akwakrom near Mankessim.

She was later taken to an uncompleted building belonging to Quansah also known as Nana Clark, killed and buried.

The region was also one of the hardest hit when the floods came with the rains in June.

The floods claimed the life of a Prison Officer at Ankaful who was swept off by floodwaters while hundreds of people were displaced and properties and infrastructure running into millions of cedis destroyed.

The region in the year under review recorded 1,037 accidents according to the Regional office of the National Road Safety Commission involving 1,628 vehicles.

In the area of politics, the Progressive People’s Party held its 10th anniversary in Elmina in October 2022.

The University of Cape Coast also played host to the Women and Youth delegates congress of the National Democratic Congress (NDC) later in the year while both the ruling New Patriotic Party 9NPP) and the NDC held congresses for branch, constituency and regional executives.

In the Awutu-Senya East constituency, President Akufo-Addo inspected the Kasoa Court Complex before proceeding to Awutu-Senya West constituency, where he paid a courtesy call on the Paramount Chief of Awutu in Breku, inspected work on the Kasoa-Bawjiase road and inaugurated the 1D1F Gas Cylinder Factory in Chochoe and a Lubricant Factory in the Gomoa East District at Fetteh.

He also inspected an Agenda 111 Project in Gomoa Afransi in the Gomoa Central Constituency and met with chiefs in Mfantseman.

President Akufo-Addo also called on the chiefs of Komenda and inspected the Komenda Sugar Factory giving the assurance that it would be inaugurated before the end of 2022 but it is yet to be inaugurated.

He also paid a courtesy call on the Chief of Elmina and inspected the construction of the Fishing Harbour, all in the Komenda Edina Eguafo Abirem Constituency.

In Cape Coast, President Akufo-Addo inspected the Infectious Disease Centre at Cape Coast Teaching Hospital, inaugurated the office complex of the Central Regional House of Chiefs, and attended the Oguaa Fetu Afahye to climax the tour of the region.

Earlier in April, Prof. Samuel Duncan of the Centre of Awareness (COA) unveiled a campaign as part of a five-year strategic action plan towards global peace which was attended by hundreds of people from across the country at COA's Fourth Public Lecture in

He used the occasion to launch a fund towards funding activities that would engender peace.

In October 2022, the Ghana National Petroleum Corporation also commenced the decommissioning of the Saltpond oil field, one of the oldest in the country.

The GNPC said the rationale behind the exercise was on safety grounds coupled with the fact that the oil field had seen a decline in production levels, producing not more than 200 barrels per day compared to its earlier production of 4,800 barrels a day.

In 2022, festivals in the region all bounced back hard after being on COVID19 induced break.

The University of Cape Coast maintained its position as the best university in Ghana, first in West Africa and 4th in Africa in the 2023 Times Higher Education annual rankings.

The announcement added more impetus to the university’s 60th-anniversary celebration which was graced by the President.

At the University of Education Winneba, Police used tear gas to disperse demonstrating students over discrepancies in examination results.