The Africa Centre for Democracy and Socio-Economic Development (CDS Africa) has introduced its flagship programme to promote effective learning in rural basic schools.

Known as the Rural Education Ownership Initiative (REOI), it will seek to achieve mainstream awareness of the state of rural schools, and attempt to address a policy and investment gap between rural and non-rural schools, while establishing at least 10 education support centres (ESCs) within two years.

The initiative is intended to ultimately increase the number of rural pupils sitting and passing the National Standardised Test while promoting active community participation and acceptance, as well as increased school enrolment and retention.

She said the initiative had three main objectives linked directly to its modules — education awareness promotion, facilitation of the establishment of an after-school learning, and resource centre to support pupils, teachers, and the community, and to promote advocacy for policy adaptation, infrastructure and associated education improvement measures.

These are to ensure inclusive and equitable learning opportunities for rural pupils.

Ms Appiah-Kubby said the initiative would be funded and implemented through fundraising and local mobilisation, grants, and partnerships that would bring together the government, international organisations, the media and private enterprises.

She further explained that the programme was in line with the United Nations’ Sustainable Development Goal Four (SDG 4) and Article 36 of the 1992 Constitution of Ghana.

The SDG 4 urges member countries to ensure inclusive and equitable quality education and promote lifelong learning opportunities for all.

“It is important to note that the completion of the SDGs is just eight years away (2030). This means that time is running out, and we must act immediately,” she cautioned.

The Board Chairman of CDS Africa, Professor Isaac Abeku Blankson, stressed the need for media advocacy and partnership to ensure that the CDS agenda of stimulating and promoting growth gained recognition and support from state and non-state actors.

He said it was rather unfortunate that currently there was a disconnect between democracy and socio-economic development, as well as politics and development. 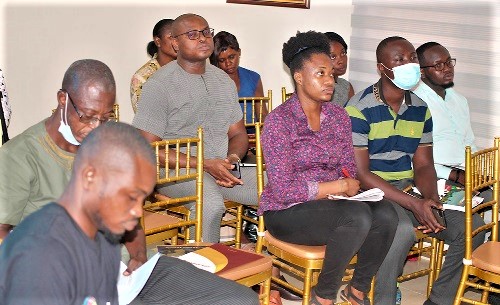 Prof. Blankson, therefore, called on the media to help to build a smooth interplay between systems of governance and their correlation with development.

CDS Africa, registered in Ghana and the US, is an independent think tank born out of the need to deepen and market democracy as a prerequisite for advancing the socio-economic development of Africa.

The Director of Research of CDS Africa, Dr Doris Boateng, said: “In our first year, we have done some significant work, namely the evolution of the REOI, and forged a working partnership with SWALIMO, an advocacy group in Eswatini (former Swaziland), towards achieving a democratic monarchy or full democracy for their people".