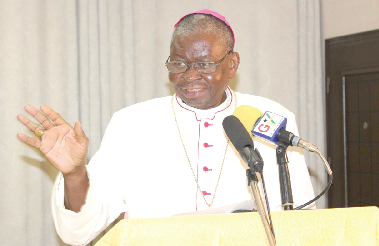 The President of the Catholic Bishops’ Conference, Most Rev. Philip Naameh has dispelled what he says are “fabrications and distortions” attributed to him in the media suggesting that Ghana risked becoming a Muslim-majority state if LGBTQ was legalised in the country.

The said publication purportedly coming from CNN and reproduced by some media houses in Ghana, he said, was an attempt to cause disenchantment for him and “break the formidable coalition behind the Proper Human Sexual Rights and Family Values Bill.”

“I wish to state categorically and for the avoidance of doubt that the statement attributed to me is false and does not reflect the actual content of the conversation which has to do with the Church’s support for the Bill,” he said.

Most Rev Naameh issued the disclaimer at a presser in Accra on Monday, October 11, 2021, to respond to the allegation which has already generated some public backlash for the Catholic Bishops’ Conference.

The supposed comments come amid the recent storm of controversies surrounding the Proper Human Sexual Rights and Family Values Bill which seeks to proscribe activities of gays and lesbians in Ghana.

He is alleged to have made the comment when he granted an interview to CNN in Accra.

Most Rev Naameh is alleged to have said that “those who are promoting gays and lesbians are not going to have children at all, and within a short time, nobody should be surprised that Muslims will become a majority in this country and declare it an Islamic state.”

But Most Rev. Naameh maintained that the Catholic Bishops’ Conference was for a mutual collaboration among Christians, Muslims, traditional leaders and all other faith-based organisations in the country for peaceful co-existence and the common good.

“It is in light of the above that I call all peace-loving Ghanaians and all people of goodwill to disregard with contempt the fabrications and distortions which intended to distract our collective quest to make the bill passed,” he said.

He added that “I have always promoted peaceful coexistence, religious tolerance and harmony among all people.”

He reiterated the stance of the Catholic Church in Ghana on the issue of LGBTQ, stating that the practice was against not only Christian values, but also those of Muslim and traditionalists.