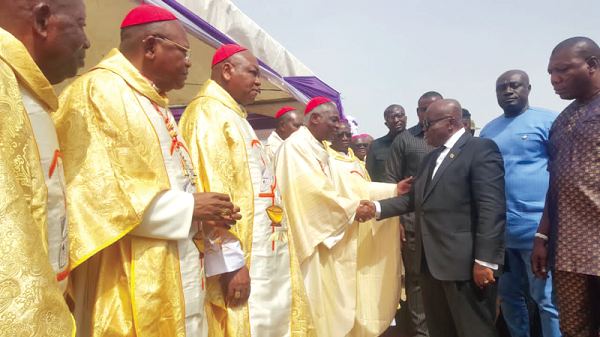 President Nana Addo Dankwa Akufo-Addo has eulogised the late Richard Cardinal Kuuia Baawobr saying his death has created a big vacuum in the country that will be difficult to fill.

He said his impact on the social and spiritual lives of the people of Ghana, especially the Catholic community, was immense and could not be measured.

“Our nation has lost one of the finest citizens, one who will be difficult to replace,” President Akufo-Addo said in Wa yesterday when he attended the final funeral rites and Requiem Mass of Cardinal Baawobr, the then Bishop of the Catholic Diocese of Wa.

“News of the death of Richard Cardinal Kuuia Baawobr brought considerable sadness not only to me and to the Catholic Church in Wa but also to all well-meaning Ghanaians,” he added.

President Akufo-Addo said the news of the elevation of Cardinal Baawobr to a cardinal brought great joy not only to the Catholic community in Ghana and the people of the Upper West Region but also to the government and the nation at large.

President Akufo-Addo expressed condolence to the church of Wa, the universal Catholic Church, and all the people of Wa, who had suffered a great loss due to the departure of the “faithful servant.”

“Cardinal Richard fell asleep in the Lord after a life spent entirely for the church … with the meekness and serenity of the saints,” he said.
He also eulogised the late Cardinal as someone whose “figure has had great importance in the life of the church in Ghana, in Africa, and the universal church.”

He said under the guidance of the late Cardinal Baawobr, the Diocese of Wa carried out an intense work articulated on evangelisation in the sacrament, in human promotion, and in ministries.

“The death of our brother in Christ saddens us, but it is also an encouragement to all of us to continue with humility and simplicity in faithful service to the gospel,” Most Rev. Jagodzinski said.

Cabinet ministers, Council of State Members, Members of Parliament, the Second Deputy Speaker of Parliament, Andrew Asiamah Amoako, the Minister of the Interior, Ambrose Dery, and Regional Ministers among others accompanied President Akufo-Addo to the funeral.

Also present at the funeral were representatives from the Missionaries of Africa, the Ghana Catholic Bishops Conference and priests from other countries, the Upper West Regional House of Chiefs, and the Muslim community in Wa among others to pay their last respects to the late Cardinal Baawobr.

The Cardinal’s funeral was solemn while the homily was by the Very Rev. Fr Stanley Lubungo, Superior General of the Missionaries of Africa .

The funeral had been described as one of the best organised and well patronised, which drew mourners from across the country, especially the five northern regions.

Cardinal Baawobr died on Sunday, November 27, last year, in Rome after he was made a Cardinal by Pope Francis on August 27, last year.