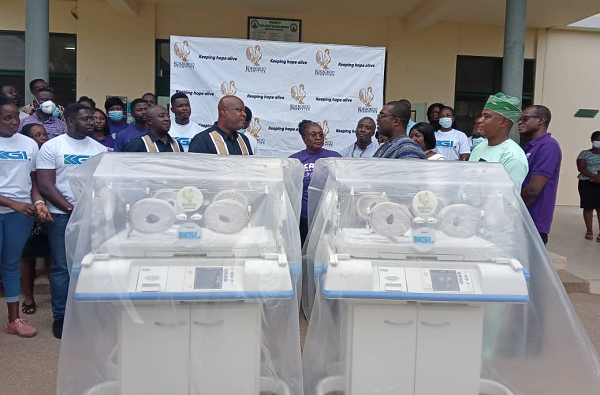 The Chief Executive Officer of the Cape Coast Teaching Hospital (CCTH), Dr Eric Kofi Ngyedu, has appealed for the establishment of a well-designed and resourced Neonatal Intensive Care Unit (NICU) for the hospital.

According to him, the hospital currently does not have a well-designed NICU with all the necessary facilities expected at the NICU to aid optimal care for preterm babies.

He said due to the lack of NICU with its all necessary facilities and human resources, the hospital has in the interim, created what it calls the “Special Care Baby Unit” to offer some NICU services for preterm babies.

Dr Ngyedu made the appeal when the Kokrokoo Charities in collaboration with KGL Foundation, presented two infant incubators worth US$20,000 to the hospital on Friday, March 25, 2022.

He said the hospital has identified the establishment of NICU as a priority project due to the large number of preterm babies that are delivered at the hospital as well as those that are referred to them.

He explained that the hospital’s Special Care Baby Unit was not up to the standard of NICU and therefore could not provide all the services a well-resourced NICU could provide.

He said the hospital is currently “advocating for a New Neonatal Intensive Care Unit built, well designed, with a trained human resource to be able to take care of these babies.”

He noted, for instance, that some preterm babies are brought to the hospital from Côte d’Ivoire, adding that the hospital records many preterm deaths due to lack of space and equipment.

The initiative is aimed at identifying and addressing critical social needs in Ghana and help resolve emerging development challenges.

For his part, the Founder and Chief Executive Officer of Kokrokoo Charities, Mr Kwami Sefa Kayi, said the Foundation decided to donate the two incubators to the facility due the high traffic of preterm babies that are received and cared for at the hospital.

He gave an assurance that the Foundation would work with its partners to help establish a new NICU for the hospital, calling on benevolent individuals and corporate organisations to support the Foundation in that regard.

For him, Mr Sefa Kayi “there is very little space” currently at the hospital’s Special Care Baby Unit as against the large number of preterm babies that are received at the facility, observing that the limited space meant that there will be serious pressure on the centre and the staff.

The Programmes Manager of KGL Foundation, Mr Annorbali-Sarpei Nii Ankonu, said the Foundation would continue to support initiatives aimed at improving healthcare delivery in the country.

He said the Foundation since its establishment has been empowering communities and changing lives through sports, education, sports and health supports.

Before the official handing over of the infant incubators to the hospital, the hospital’s staff, particularly those at “special care baby unit” were taken through how to operate and use the incubators.

The trainer, Mr Yaw Esuon Arthur, a Biomedical Engineer, admonished the hospital’s staff to follow the right procedures in using the incubators, noting that when properly maintained, it could last for about 15 years.