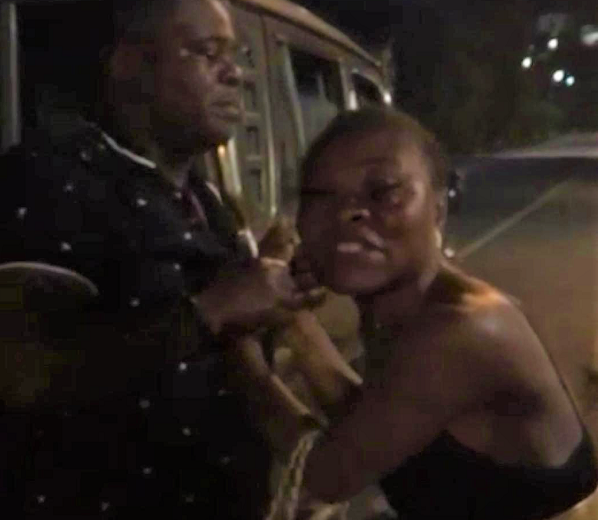 A 42-year-old driver who allegedly assaulted a woman during a night escapade on 6th March, in Cape Coast in the Central Region, has been arrested by the police.

Identified by the police as Godwin Bayor alias Yaw, he was captured in a video in an argument with the woman.

He was allegedly driving a government registered Mahindra vehicle with a GV number plate (GV 127- 16).

This year’s Independence anniversary national celebration was held in Cape Coast and so a lot of visitors were in town.

Speaking in the Fante language, the woman in the video alleged that she was working when the driver picked her up around the Hutchland area in Cape Coast.

The one who filmed the incident chanced on them arguing, with the woman tightly holding on to the man’s shirt.

The woman explained that she refused to accept the man’s offer (cash) and demanded something higher.

The man on his part explained that he was taking her to a place and there was a misunderstanding and he asked her to disembark from the vehicle.

The woman rather insisted that she should be taken back to where he picked her up (Hutchland).

This degenerated into an alleged assault. The woman was spotted in the video with a bruised face. (Video attached below)

In a press statement issued on Sunday night (March 13, 2022), the Central Regional Police Command said it has arrested the 42-year-old driver, Godwin Bayor alias Yaw for allegedly assaulting a woman on March 6, 2022, at Cape Coast.

“His arrest follows a Police investigation into a viral audio-visual tape intercepted in which a man was captured assaulting a lady in the night.,” the police statement added.

The suspect is currently in Police custody assisting the investigation, it added.

“We thank the public for their partnership with the Police in getting the suspect arrested to face justice.

Further details will be communicated by the Central Regional Police Command in due course.”