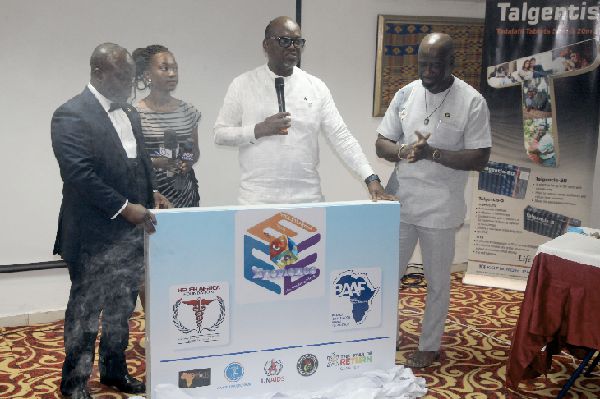 Health Evolution and Lifestyle Empowerment (HELEH) Africa Foundation, the health arm of B-Heck African NGOs Alliance, in partnership with the Joint United Nations Program on HIV and AIDS(UNAIDS ), has launched the third edition of HELEH Africa 2019, a health campaign aimed at empowering health experts in Africa and the African diaspora to return to the continent and contribute to improving health systems and health delivery.

Dubbed “3E Xperience”, the six months’ campaign is being organised to lay bare Africa's potential to bridge the technology and socioeconomic gap and to achieve quality health care and commerce systems for all.

Its primary motive is to help curb the HIV and AIDS pandemic, unhealthy lifestyles and communicable and non-communicable diseases.

The campaign is supported by the Diaspora Affairs Unit at the Office of the President and the Chamber of Pharmacy Ghana.

The programme was launched in Accra last Thursday and was on the theme: “Merging health expertise of Africa and the Diaspora to bridge the technological and socio-corporate gap; A refined holistic approach to enhance the development of Africa through pan Africanism”.

Activities lined up to meet the objectives of the campaign were introduced at the launch.

The President of HELEH Africa Foundation, Dr Benedicta Ohene-Manu, in a speech read on her behalf, said the campaign was also in support of the United Nations Sustainable Development Goals.

The UNAIDS Country Director Ghana, Mrs Trenton-Mbonde, also in a speech read on her behalf said Africa’s population was expected to rise by 50 per cent to between 1.8 to 1.9 billion people by 2050 and reiterated the need for the continent to begin preparing for a stronger healthcare system for the future.

The Chief Executive Officer (CEO) of the Chamber of Pharmacy Ghana, Mr Anthony Ameka, touched on activities for the campaign. He said a health summit on application of Health Information Management systems (HIM) and communication with emphasis on HIV-AIDS related cases, and the rights of patients would be organised for the media on November 27, this year.

“On December 1, there will be a fundraising concert to mark the World AIDS Day. There will also be a summit on Intra African Trade and Emerging Brands Empowerment and Investment bazaar aimed at fostering trade across Africa in line with the Continental Free Trade Area Agreement from December 4 to 6,” he said.

In addition, he said, there would be the HELEH Africa Honours to recognise stakeholders who had contributed towards the development of health systems on December 7, 2019.

“On December 21, the most distinguished brands in the health sector would be recognised and on January 13, 2020, a sanitation challenge campaign would be organised in Kigali, Rwanda to promote cleanliness in Africa.

The final event will be the HELEH Africa Diplomats and Corporate Health Charity Games with the focus on eradicating non-communicable diseases on April 2020,” he said.

In his closing remarks, the Country Director of IPAS, Dr Koma Jehu-Appiah, called for sex education to be encouraged in the country as a means to reduce the increasing number of teenage pregnancy cases across the country.

He lauded the campaign, saying it had come in at the right time to address issues on sexuality.

The Director of Diasporan Affairs at the Office of the President, Mr Awiah Ababio, called on Africans abroad to return to the continent to help boost African brands globally and improve healthcare systems and livelihoods of the people.