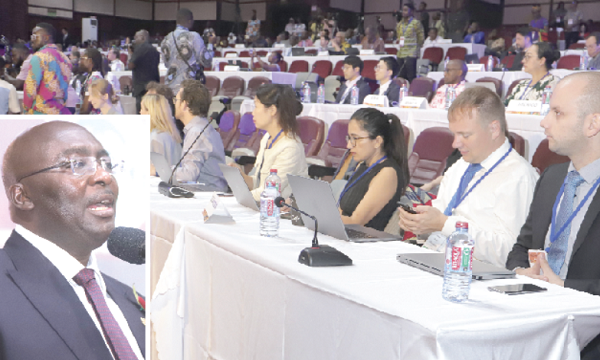 Cabinet has approved the space policy and implementation plan of the country to pave the way for the full operationalisation of the Ghana Space Agency next year.

The Vice-President, Dr Mahamudu Bawumia, who announced this, said the country was also actively pursuing improved ways to harness the power of earth observations to support planning and decision-making.

These earth observations, he mentioned, were weather forecasting and measuring land-use change such as deforestation, monitoring coastlines and monitoring and responding to disasters, including fires, floods and earthquakes.

Dr Bawumia, who made this known when he addressed the opening session of the plenary of the 18th annual meeting of the Group on Earth Observation (GEO) week in Accra yesterday, therefore, called on the GEO community to continuously invest in capacity development in low and middle-income countries.

That, he explained, was to enable these countries to acquire the necessary technologies, knowledge and skills to access and use earth observation data effectively.

“We see GEO playing a prominent role in fostering cooperation and partnerships among countries to co-design and co-develop programmes and initiatives that support countries with limited earth observation resources and capacities.


“The establishment of national GEOs can be instrumental in promoting institutional coordination for the advancement of earth observation activities at the country level. Through impactful activities, countries will experience the GEO value addition and be motivated to actively contribute to the growth of the GEO community,” the Vice-President added.

Earth observations are data and information collected about the planet and include satellite data, as well as in-situ data collected on the ground, while the GEO is a global partnership that works to make these observations openly available around the world and convenes partnerships that produce earth observation-based tools and services to enable better decisions, policies and investments.

The Ghana Space Science and Technology Institute (GSSTI), which has the responsibility to harness, coordinate, research, commercialise and explore space science and technology for the socio-economic development of the country, has since its establishment and official launch in 2012 set up three major centres focusing on radio astronomy and astrophysics, remote sensing and climate, satellite communications and engineering.

Amid mounting environmental challenges and rapid technological advances, the GEO meeting will make evident how global partnerships were accelerating the use of earth observations to inform better local decisions on issues such as climate adaptation, as well as food and water security.

This year’s meeting is being hosted by Ghana’s Ministry of Environment Science Technology and Innovation with support from the Ghana Statistical Service, the University of Energy and Natural Resources, and the GSSTI.

Vice-President Bawumia further urged the GEO community to continue working together to create the enablers for nations not only to access data and services on earth observation but to use them to address identified development challenges.

“Today, investments in earth observations capabilities are growing and enabling the widespread application of environmental intelligence to tackle challenges.

Despite the increased data availability than ever before, many low- and middle-income countries are lagging in infrastructure, capacity and expertise to tap into advances made in earth observations technologies.

“The fight against poverty, hunger, natural resource depletion and efforts towards a clean environment and to achieve economic prosperity is at serious risk without a safe and secure planet. We believe that this gathering offers Ghana and the rest of Africa the opportunity to catalyse increased use of earth observations data, tools and services to inform decisions for accelerated climate and sustainable development action,” Dr Bawumia stressed.

The Minister of Environment, Science, Technology and Innovation, Dr Kwaku Afriyie, who welcomed the participants, said his outfit considered the plenary session of GEO as a springboard to accelerate the government’s engagement with the global community to address environmental challenges.

He said the government was committed to advancing the economy and society using data, technologies and services derived from space and earth sciences and had passed the national space science policy last year to, among other things, advance the application of space technologies, including satellite observation to address various environmental and socio-economic challenges.

Dr Afriyie said the country was also positioning itself to respond to unanimous calls from the global community to develop and apply the appropriate data, information and technologies to support its mitigation and adaptation measures.