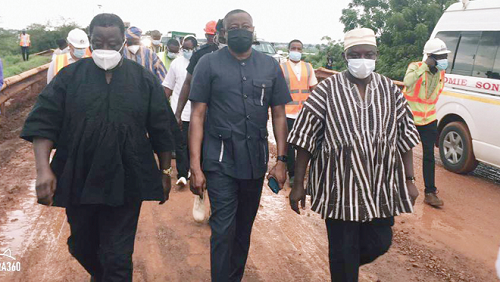 Mr Kwasi Amoako-Atta (left) the Minister of Roads and Highways, and Mr Saeed Muhazu Jbril (middle), the Savannah Regional Minister, inspecting the road from the Kintampo side that linked the Buipe Bridge

W Work on fixing the section of the Busunu-Daboya road that was washed away by floods after days of torrential rains in the Savannah Region has begun.

The 17-kilometre portion of the road was cut into two, rendering the Busunu-Tachali bridge inaccessible days after the rains.

The construction work, being undertaken by Messrs Logistics Support Limited, began last Tuesday and it is to immediately restore normal pedestrian and vehicular movement between Busunu and Daboya that was cut off.

The Minister of Roads and Highways, Mr Kwasi Amoako-Atta, who gave an update on the situation on that route to the Daily Graphic, said presently pedestrians were able to cross the bridge, while vehicles would be able to do so by the close of the week.

Mr Amoako-Atta gave the update when he visited the area to inspect similar ongoing works on a portion of the Kimtampo-Buipe road that linked the Buipe Bridge over the Black Volta in the Central Gonja District in the Savannah Region last Tuesday.

“Within a record time of less than 24 hours, we deployed a contractor to the place between Busunu and Daboya that has been cut off to fix the road. The contractor is sinking boulders to fix that road," he indicated.

The visit was to afford the minister the opportunity to assess the progress being made at the construction sites, having been there earlier when the incidents occurred.

He was accompanied by the Savannah Regional Minister, Mr Saeed Muhazu Jibril, some technical staff from the ministry and road sector agencies.

Mr Amoako-Atta said the immediate but temporary solution to fix the problem had had the caved in area filled with rock to reinstate passibility, and that in the dry season, the road would be raised above flood level and there would also be the construction of additional culverts to take future floodwaters.

He said the government was not only looking at bridges but also roads that linked the bridges, as those excellent bridges would be white elephants if there were no proper roads linked to them.

Meanwhile, Mr Amoako-Atta has directed that the collection of tolls on the Buipe Bridge be suspended for four weeks.

The directive, which took effect from yesterday, is to enable the contractor working on the Buipe Bridge approach to deliver on schedule and ensure the safety of the toll collectors.

He said after the work had been completed within the four-week period, the toll collectors would resume work.

The road works are to fix the approach road from the Kintampo section to the Buipe Bridge that has often caused periodic vehicle breakdowns at the section of the road, resulting in heavy traffic congestion.

The construction, being undertaken by Queroz Galvao, involves the removal of deformed road pavement, back fill with crushed rock, placement of asphaltic concrete 200m (approx.), de-silting of existing side drains and pedestrian walkways.

Others are the demolition and replacement of failed concrete slabs and asphaltic concrete overlay of existing bridge and approach roads (800m approx.).

Although the ongoing road construction works at the section of the road linking the Buipe Bridge had created some inconvenience for the motoring public, Mr Amoako-Atta commended the contractor for adopting good traffic management that had eased congestion on the road.

He added that the Buipe Bridge lay within the central corridor road from Accra, Kumasi, Tamale up to Paga, adding that it was the busiest road in the country.

"So if we experience any problem like this, it is of great worry to the government, and that is why we want to work on it as quickly as practicable and with dispatch," he said.

The Roads and Highways Minister, therefore, urged the contractor to adopt night work, if it became necessary, to finish the road within four weeks, maximum.

Mr Amoako-Atta recalled that about two years ago, he had the unpleasant duty of declaring a total closure of the Buipe-Yapei road because of the problems the Buipe and Yapei bridges had and that had brought a lot of difficulties and hardships to the people.

Consequently, the President directed that all steps be taken for the situation never to be experienced in the country.

That, he said, that was why the government had taken steps to build three new bridges, the Buipe, the Yapei and the Daboya to provide an alternative route to Buipe and Yapei through Fulfulso to Daboya.

He said the Buipe and the Yapei bridges were built just after independence in the 1960s and these long-spanned bridges of about 125 metres stretch each had outrun their designed life.

He said the three bridges that had been awarded to Queroz Galvao would be built simultaneously and completed during the second term of President Akufo-Addo's government.

He said the contractor had already mobilised to site and it was engaged in soil testing to see where to sink the piers and all, saying just after the rainy season, real construction of those bridges would begin.