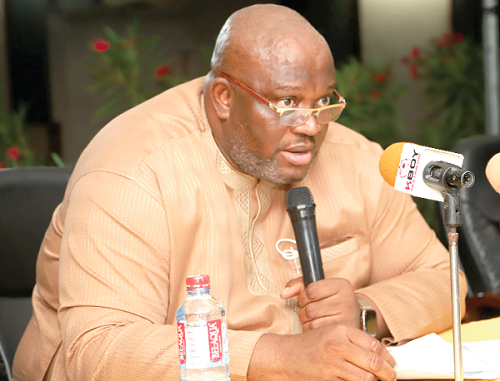 Traders engaged in bulk breaking activities in and around the central business district (CBD) of Accra have been given up to July 1 to relocate to the Adjen Kotoku Market in the Ga West Municipal Assembly (GWMA).

After the deadline, the Greater Accra Regional Coordinating Council (GARCC), together with a security task force, will move into full gear on a massive decongestion exercise to remove all structures within their trade areas.

The Greater Accra Regional Minister, Mr Henry Quartey, who gave the directive, said the move was in concert with the “Let’s Make Accra Work” initiative by the GARCC.

The minister stated this when he held a meeting with the leaders of some onion sellers associations in Accra yesterday.

To prevent any inconveniences, Mr Quartey said the council had budgeted some amount of money to assist the traders in transporting their wares.

The Adjen Kotoku Market is a bulk breaking market complex which was started in 2008 and completed in 2011.

It was originally built to accommodate traders in the Agbogbloshie Market to ease congestion in the area.

The project comprises a free draining platform for loading and unloading of goods and 95 sectional storage units of approximately 30 metres square each with secure locking facilities.

It also has a senior high school (SHS), a health centre, a police station as well as a fire station.

However, since its completion, the market has been abandoned without any governmental intervention.

Already, Mr Quartey said he had personally paid an inspection tour to the market and was certain that the place was more suitable for bulk breaking business.

He observed that because the CBD was a busy market area, many traders within the region were eager to trade there.

That, he said, had resulted in several spillover traders scattered along the streets, which had caused too much congestion in the city.

To bring back sanity and ensure discipline, Mr Quartey said the GARCC would not relent in its effort to ensure that the vision of making Accra work was achieved.

To ensure proper allocation of spaces to the traders, the regional minister urged the leaders of the various associations to provide data on their members.

Already, he said, the council had engaged with the chiefs of Adjen Kotoku to provide an extra land to ensure an expansion of the market to accommodate as many traders as possible.

“Whatever happens, there is going to be a massive decongestion exercise but we don’t want to apply force and that is why we are using concerted efforts. There is time for everything and this time around, we won’t take any excuses,” Mr Quartey said.

The Chairman of the Ghanaian Onion Sellers Association, Alhaji Tijani Mohammed, commended the minister for giving them much time to prepare ahead of the relocation exercise.

“We will make sure that we will make all the necessary preparations to move our wares,” Alhaji Mohammed said.