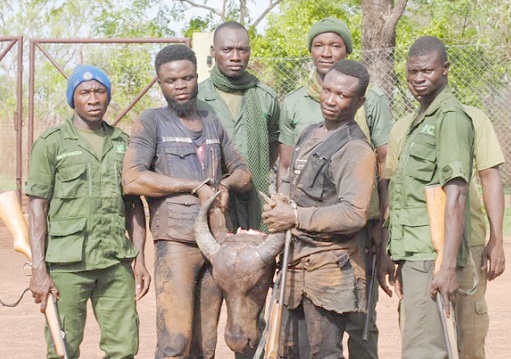 The poachers with the rangers who effected the arrest Follow @Graphicgh

Two poachers have been arrested by rangers of the Mole National Park in the Savannah Region for allegedly poaching and killing a buffalo in the park.

The suspects, Mumin Baharu and Osman Ibrahim, alias Vuga, are said to have undertaken the act on Saturday, April 9.

The rangers were said to be on their routine patrols in the park when they heard multiple gunshots and rushed to the scene.

Upon reaching the scene, they saw that the poachers, numbering about four, had killed the buffalo, severed the carcass and were about to share the meat among themselves.

The Assistant Manager of the Mole National Park, Mr Bona Kyiire, who confirmed the incident to the Daily Graphic, said the suspects had been handed over to the police and that they would be processed for court after investigations.

He explained that upon detecting the activities of the suspects, the rangers strategically positioned themselves and managed to round up two of them, with the other two escaping.

He indicated that a single-barrel gun which was used to kill the animal had been retrieved from the suspects.

Poaching has been the biggest threat at the Mole National Park. Poachers target elephants, buffalos and antelopes for a lucrative Chinese market in the area.

Mr Kyiire expressed worry about the increasing cases of poaching around the reserve and said the management had put in place stringent measures to help protect the wildlife in the park.

“It is not a good sign when people want to destroy the wonderful creatures God has given us; it doesn’t help the course of wildlife preservation.

Such crimes go against all of us, so we want to see stiffer punishment of people who engage in such acts to serve as a deterrent to others,” he said.