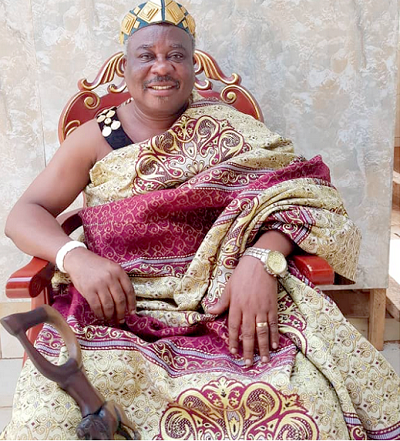 The Paramount Chief of the Nungua Traditional Area, Oboade Notse King Odaifio Welentsi III, has called on the Supreme Court to give a clear and conclusive interpretation of the laws of the country regarding lesbian, gay, bisexual, transgender and queer Individual (LGBTQI) rights to help bring finality to the ongoing debate on the subject.

Oboade Welentsi III said the debate on LGBTQI was getting “irritating” and had reached the point deserving of a “final” decision.

In a statement issued to the media last week, Oboade Welentsi III, who is also the President of the Nungua Traditional Council, said he had observed in the last decade the discussion on the rights of the LGBTQI community had attracted different opinions stemming from law, religious, faith, culture, politics and sheer logic.

“As a people governed by law, we seem to be confused and divided with these divergent opinions,” he said.

He added that “legal brains always disagree with each other though they all quote the same law (section 104 (1) (b) Criminal offences Act) believed to be against LGBTQI in Ghana.”

Oboade Welentsi III said the time was right for the Supreme Court to bring finality to the matter.

“Till date the highest judicial body (the Supreme Court) which has the power of interpreting the Constitution or case laws has not on its own, come out to give a clear interpretation of what this law means.

“The closest attempt was in 2012 when the Constitutional Review Committee (CRC) created in 2010 to collate public views to review the 1992 Constitution, recommended the country’s SC should rule on whether the country should legalise same-sex acts,” he said.

He said the CRS report indicated that “It is very probable that a proposal to give some recognition to same-sex relationships in Ghana at this stage will be condemned by a large section of the population in the country — mainly on religious and cultural grounds”.

It said on the other hand, the report said “a suggestion to introduce a provision in the Constitution expressly excluding same-sex marriage in Ghana would be clearly seen by many people in the county and outside of it as a reactionary move not worthy of a progressive state”.

He, therefore, encouraged the SC to follow the United States of America’s SC which, after a quarter-century debating on LGBTQI, delivered a verdict on it in 2020 and gave a clearer interpretation on the subject.

On the personal level, Oboade Welentsi III said “I will fight any law that gives the LGBTQI community or people the right or power to lure non-LGBTQI people into practising the former's sexual orientation”.

However, he said “if the law makes it clear that no one should discriminate against LGBTQI people — by way of denying them employment, accommodation, or their lives and peace of mind, I will embrace such law”.