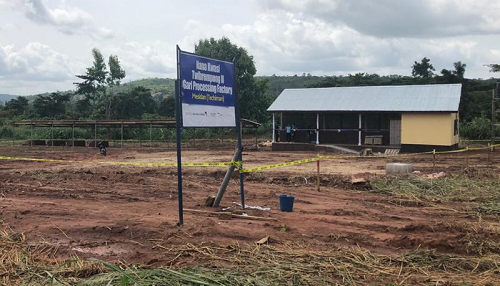 BOK Africa Concern, a Berekum based Non-Governmental Organisation (NGO) supported by its implementing partners has handed over Nana Kwasi Twibrempong II Gari processing factory to Mesidan community in Techiman in the Bono East Region to create employment for returnee and potential migrants in the area.

The project's implementing partners are International Organisation for Migration (IOM), Ghanaian - German Centre for Jobs, Migration and Reintegration (GGC), and Gesellschaft fur Internationale Zusammenarbeit (GIZ) aims at reducing the occurrence of irregular migration as well as reintegrating migrants in the community.

The Executive Director of BOK Africa Concern, Mr Benson Obeng-Savio Boateng, said Mesidan community was selected due to its record of high numbers of irregular migrants and huge socio-economic prospects.

He said the decision to settle on building a gari processing factory followed discussions between major stakeholders including the NGO and community leaders during a community entry to determine and assess the needs of the area, and called for effective and efficient management and sustainability of the facility.

Mr Boateng noted that the chiefs provided a one acre land, skilled and communal labour for the construction of the factory.

He said profit that would be generated from the facility would be used to develop the community.

The Executive Director said BOK would delegate its representative as a management committee member to monitor and report on the factory's activities for the next two years.

He expressed appreciation to all the partners for supporting a cause to reintegrate returnees and retain potential migrants.

The Chief of Mesidan, Nana Kwasi Twibrempong II, whom the factory is named after advised citizens of the area to ensure the facility is preserved for posterity and towards the realisation of the objectives with which it has been established.

He added that the community would allocate a parcel of land for farming and agriculture purposes, hence urging the youth in the community to take advantage of the factory to enhance their livelihoods.