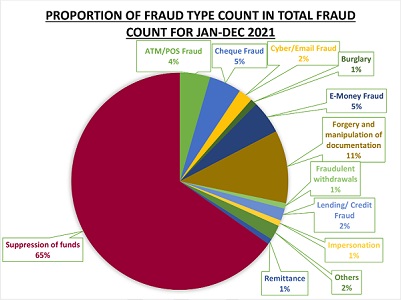 In all, 53.46 per cent of the incidents of fraud reported last year involved staff of the financial institutions.

The upsurge in losses recorded for the period was due to the increased use of online payment platforms for fraudulent transactions.

This was contained in the Banking and Specialised Deposit-Taking Institutions (SDIs) and Electronic Money Issuers (EMIs) fraud report for 2021 issued by the Bank of Ghana.

Statistics indicate that staff involvement in fraud cases increased to 278, as compared to 253 in 2020, representing an increase of 9.88 per cent year-on-year.

Rural and Community Banks recorded the highest rate of staff involvement in fraud with a figure of 46.04 per cent, the Universal Banks accounted for 28.06 per cent, while the Savings and Loans companies accounted for 16.55 per cent.

Another significant fraud type was impersonation which recorded a loss of GH¢10 million. This loss was attributed to lack of due diligence on the part of bank staff and customers of financial institutions when carrying out transactions.

ATM card/POS related fraud also recorded the highest loss of GH¢22 million. This can be attributed to negligence of some customers and weak systems of some financial institutions.

The increase in the usage of electronic and digital platforms in the financial sector resulted in an increase in ATM card/POS fraud.

EMIs also recorded 12,350 mobile money-related fraud incidents in 2021. The total value of fraud reported by EMIs for the 2021 amounted to GH¢14.2 million.

Out of 144 licensed Rural and Community Banks, 111 of them, representing 77.08 per cent of the sector submitted fraud reports for the period under review.