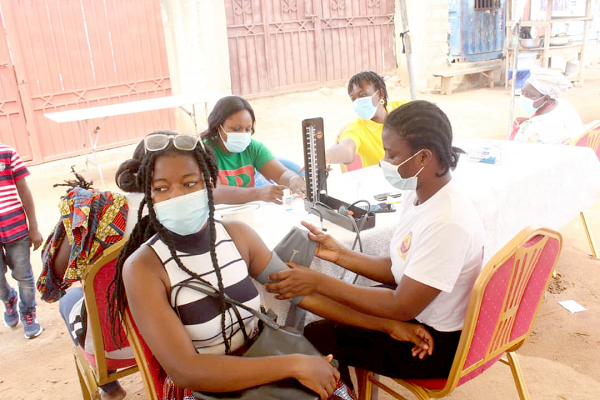 The Programme Coordinator of the National Blood Service, Ghana, Mr Mark Kofie, has said that blood donation replenishes and improves the blood of a donor rather than causing a shortage of blood in the donor’s body.

He said research had shown that those who donated blood were healthier and lived longer because their blood was always refreshed.

He said an individual would only be allowed to donate blood only after series of tests were conducted.

“When we ask for blood donation, we check the donor's blood level and see if it meets the required standard. If it does, we only take as little as 450ml which is less than a sachet of pure water. We take from your surplus,” he elaborated.

Mr Kofie made the statement at a free health screening and blood donation programme organised by Zipo International Ministry, a religious organisation, in collaboration with the Assembly Member of the New Gbawe Electoral Area, Mr Andrew Oppong Amoako, in Accra last Saturday.

The programme formed part of a three-day crusade organised by the church.

Mr Kofie encouraged individuals to voluntarily donate blood to help save lives and urged the public not to wait until a friend or a relative needed blood before they donate, saying “the blood should be waiting for the patient and not the other way round”.

“If we look at various cases such as sickle cell, accident victims and women who lose blood through child birth, they need blood as a matter of urgency, but blood is not readily available for them,” he bemoaned.

Mr Kofie said the country could have sufficient blood if at least one per cent of the entire population donated blood.

Ms Grace Naah, a first-time donor, told the Daily Graphic that she was proud to donate, explaining that it was hurtful to hear that someone lost his or her life because of lack of blood.

Health professionals, including lab technicians, physician assistants and general nurses, engaged the public on various subjects about healthy living during the exercise.

The health screening involved the checking of blood pressure, testing of sugar level and malaria, while some over-the-counter drugs were dispensed to the participants.

Those whose conditions needed further treatment were referred to hospitals.

Ms Frances Quaye, a nurse, advised the public to adopt healthy living as a lifestyle and to frequently go for medical check-ups.

The Senior Pastor of Zipo International Ministry, Pastor Kennedy Appiah, said the health screening exercise and the blood donation were in line with the church’s core value of giving back to the society.

“Propagating the gospel of Christ is not only about preaching , but attending to the needs of the people. Life is about impact,” he added.