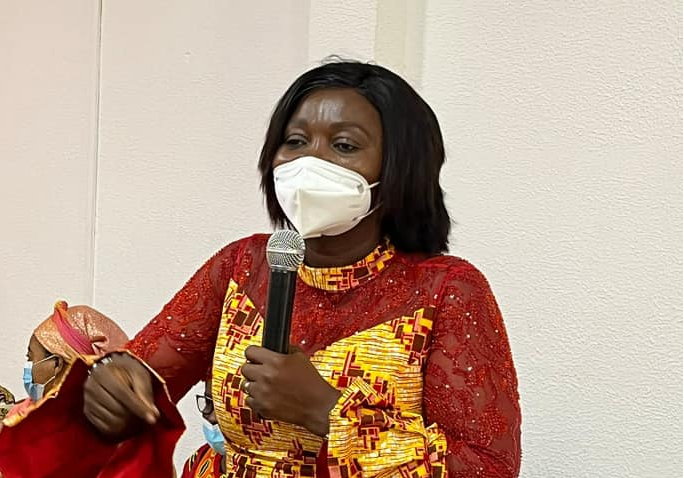 The Central Regional Minister, Mrs Justina Marigold Assan, has expressed worry over the rising incidence of bleaching among pupils in some basic schools in the Central Region, describing it as a dangerous canker that needs to be addressed urgently.

According to her, the situation was a problem that needed to be dealt with before it destroyed the health of the children.

Addressing a stakeholders’ engagement with queen mothers in the region last Monday, Mrs Assan said it was bad enough that the region was grappling with the high incidence of adolescent pregnancies, and that the issue of bleaching among some pupils in the region further threatened the health of those young people.

"Bleaching was one of the issues that came up during my conversations with our queenmothers, and most parents don't seem to care about this challenge.

“It's a problem that we can't sit by and watch it wreak devastation on our young people without being worried about," she said.

The regional minister called for immediate action and asked the queenmothers, as well as all other key stakeholders in the region, to bring the issue of bleaching among pupils under control.

"The region must battle this issue in every way possible, and all essential stakeholders, particularly queenmothers, must play a critical role in realising this dream," she said.

Mrs Assan further charged the various head teachers in the primary and junior high schools to continue to monitor pupils and students and interact with their parents on any abnormal developments they noticed, stressing that it was one of the ways to stop the children from bleaching

She said despite concerns about adolescent pregnancy, the interventions put in place were working, as the situation was steadily declining in the region.

She emphasised the need for efforts to be sustained to guarantee a drastic reduction in adolescent pregnancy in the region.

According to statistics, the region recorded 10,301 cases of adolescent pregnancy in 2020, as against 10,914 in 2019, indicating a drastic drop of 613 cases, the seventh consecutive year the region had recorded a reduction in teenage pregnancy.

"It is good to know that adolescent pregnancy has seen a two per cent reduction, but still we cannot sit aloof and watch our girls as young as nine years get pregnant and end their dreams,” the regional minister said, stressing how critical it was for the various metropolitan, municipal and district chief executives (MMDCEs) to rally behind the queenmothers and allocate resources to them, so that they could launch various sensitisation campaigns and other educational fora to help reduce adolescent pregnancies.

“To sustain the gains made in this regard, I urge the various MMDCEs to support our queenmothers to fight this battle to the core by providing the needed logistics within their means," she intimated.

The Central Regional Director of Education, Mrs Martha Owusu Agyemang, urged queenmothers in the region to use their positions and influence to promote the continuation of formal education for girls.

She appealed to them to encourage community youth, particularly teens, to take advantage of the region's many educational institutions, get formal education and avoid actions that might lead to early and unexpected pregnancy.

"Our girls get pregnant along the way and they are not able to access these schools. It is critical that our queenmothers come in to support and use their revered offices to clamp down on this challenge," she said.

The President of the Central Regional Queenmothers Association, Nana Adwoa Aduam III, reaffirmed the commitment of the association to reduce adolescent pregnancy in the region.

"We will collaborate with key institutions to help reduce this situation and also help educate parents in the communities on the need to take interest in their children's education," she said.

The bleaching, locally referred to as ‘conshore’, involves pupils and students of basic and second-cycle schools in the region.

They also apply a mixture of bleaching cream, toothpaste and ‘akpeteshie’ on their lips to achieve reddish or pinkie lips in a bid to become more beautiful.