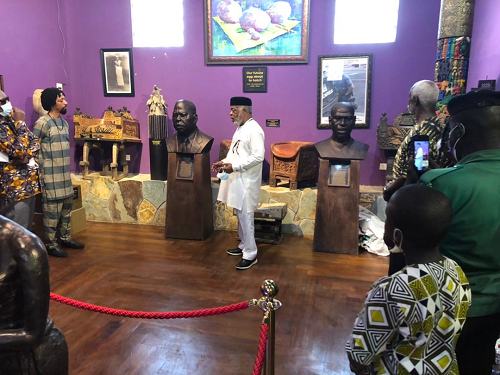 Residents of Sekondi-Takoradi have hailed the establishment of the Bisa Aberwa Museum in the area for its cultural, historic and socio-economic importance.

The museum, said to be one of the world's largest private collections, is expected to supplement the educational process by exposing the present generation to history in order to ensure that they are not left out.

At the reopening of the museum, residents and dignitaries at the event were of the view that the museum would help the present and future generations to understand and appreciate their history, as well as appreciate the achievements of their forbearers.

The collections in the museum, he said, are expected to be a source of inspiration and strength for generations to come as they learn about the struggle and successes from the past that built and impacted the African continent.

The history of Africa, according to him, should be told through every medium to promote unity, saying "Together we shall find our strength through the struggle to be better".

The museum, established in 2019, houses more than 2,200 artefacts—sculptural pieces, photographs of heroes of African struggles and African-Americans civil rights movement, as well as other aspects of the black personalities in French, Portuguese and Spanish Caribbean.

The ceremony, which was spiced up with musical performance also saw the unveiling of a bust dedicated to the late George Floyd, Yaa Asantewaa, Warrior of Asebu Amenfi, Jacob Wilson Sey, Hannah Cudjoe and John Lewis, and an old lady telling folks tale.

During the tour of the facility, guests, including school children were educated on the achievements of the heroes such as William Edward Burghardt Du Bois, Marcus Garvey, George Pardmore, Malcom X, Kwame Nkrumah, and Robert Samuel Blay. 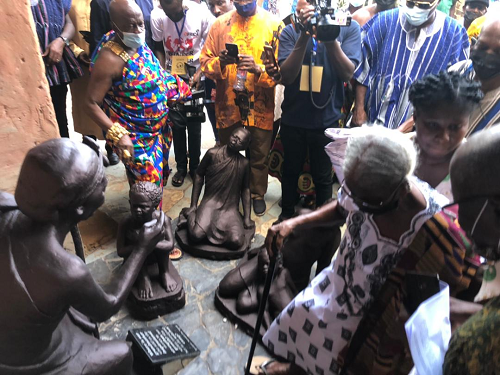 The President of the National House of Chiefs and the Paramount Chief of Sefwi Anhwiaso Traditional Area, Ogyeahohoo Yaw Gyebi II, called for conscious and collaborative efforts among Ghanaians to preserve and promote the heritages of the country and market it to the world

The museum, he said, has a crucial link to the country’s educational, cultural, economic, inspirational and aesthetic transformation.

The Metropolitan Chief Executive of the Sekondi-Takoradi Metropolitan Assembly (STMA), Mr Abdul-Mumin Issah, said the reopening of the museum marked an important milestone in the history of the metropolis and the country as a whole.

“This is an important edifice, Bisa Aberwa Museum. A magnificent tourist site developed through the instrumentality of a son of the land, the legendary Kwaw Ansah to help tell the true story of history,” he said.

For him, “In the 21st Century, museums have moved from their traditional role to collect objects and materials of cultural, religious and historical importance, preserve and present them to the public for the purposes of education to revenue generation venture that creates jobs, attracts tourists and investments.”

In 2017, he said, a study by American Alliance of Museums revealed that museums contributed $50-billion to GDP, supported 726,200 jobs and contributed $12-billion in tax revenue in 2016.