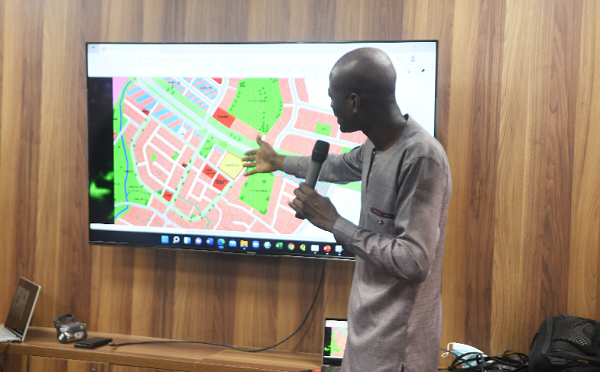 Benito Owusu-Bio (left), a Deputy Minister of Lands and Natural Resources, briefing the media on the reconstruction of Appiatse. Follow @Graphicgh

The government has opened a design competition to allow registered building industry firms and individuals to come up with a redesigned plan for Appiatse, the community in the Western Region which was levelled in an explosion.

Those who can participate with the aim of winning the bid for the Appiatse redevelopment contract must be members of professional institutions in good standing.

Proposed scheme designs are expected to be submitted by April 25, this year, out of which two shortlisted proposed schemes will be interviewed for the selection of the winning scheme, which will be unveiled on April 28, this year.

The redevelopment of the community is scheduled to start on April 30, this year.

Addressing the media ahead of the opening of the bid, a Deputy Minister of Lands and Natural Resources, Benito Owusu-Bio, said to facilitate the redevelopment, a new spatial plan of the town had been developed, in consultation with the people and the leaders of the town.

“Request for proposals went out on Monday, 28th March, 2022 for interested contractors to bid for the designing and construction of buildings. We expect to start construction by the end of April 2022,” he said.

Mr Owusu-Bio said the new plan, although would improve the spatial development of the town, had been designed to reflect the socio-economic and cultural life of the people.

“We have designed a new spatial plan for the Appiatse community. Working in deep consultation with the citizens of the town and their leaders, professionals from the Land Use and Spatial Planning Authority (LUSPA) have redesigned Appiatse.

“This plan makes room for additional social spaces such as transportation terminals, clinics, schools, markets and expansion of roads,” he said.

Mr Owusu-Bio said the Appiatse Reconstruction Implementation Team, which he chaired, had also secured temporary structures at Odumase, a nearby community, to serve as temporary homes for the people ahead of the rainy season until the town was reconstructed.

“As we enter the rainy season, it is clear that affected citizens cannot remain in tents at Appiatse. Working together with the Future Global Resources Company Limited (FGR), we have secured structures for a planned relocation as a temporary shelter for the Appiatse citizens,” the deputy minister said.

He said the team was currently preparing road designs, with costs estimates, for the Ministry of Roads and Highways to facilitate the project.

“Those of you who may have visited the community know that there is a great amount of work to be done regarding Appiatse roads. Unfortunately, the explosion did some considerable damage to roads that were otherwise in good shape. In building Appiatse back, it must include the roads in the community,” Mr Owusu-Bio said.

Over the last two months, he said, many activities had been carried out, and he thanked the citizens of Appiatse for their resilience and the warm cooperation they had offered.

A representative of the LUSPA, Mohammed Damba, in a presentation on the spatial plan and design for the reconstruction of the Appiatse community, said the plan was drawn to reflect the pre-existing lifestyle of the residents.

He said most of the ecological structures of the community had been retained in the plan.

He said about 15 per cent of the landscape had been earmarked for open green spaces.

“The site will also hold a miniature version of the former housing structures in the town. We envisage this to also serve as a tourist attraction for both local and international patrons to help raise some revenue,” he said.

Mr Damba said a site at the middle of the community had been allocated as a memorial for residents who lost their lives in the explosion.
Writer’s email: This email address is being protected from spambots. You need JavaScript enabled to view it.