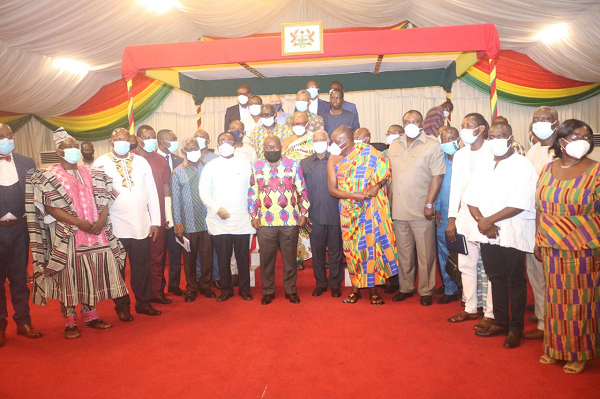 President Nana Addo Dankwa Akufo-Addo (middle), Nana Otuo Siriboe II (in Kente), the Chairman of the Council of State, and some dignitaries with the 29-member board of the Tree Crops Development Authority after its inauguration in Kumasi. Those with them include Mr Yaw Osafo-Maafo (5th left), the Senior Minister, and Dr Owusu Afriyie Akoto (6th left), Minister of Food and Agriculture. Picture: EMMANUEL BAAH Follow @Graphicgh

The full operationalisation of the Tree Crops Development Authority (TCDA) will position the country to earn about $16 billion annually from six selected tree crops from 2028, the Minister of Food and Agriculture, Dr Owusu Afriyie Akoto, has said.

According to him, that figure could double if a substantial portion of the products was processed for export.

Speaking at the inauguration of the TCDA in Kumasi last Tuesday, the minister said it had been given a target in foreign exchange to earn annually, just as cocoa was currently earning for the country.

Currently, cocoa is the major export commodity of the country, with an annual income of about $2.5 billion, but the projection is that each of the six selected crops could earn the country as much as what cocoa is bringing in or even surpass it.

The TCDA, with headquarters in Kumasi, will spearhead the diversification of the Ghanaian agricultural sector, with a focus on the development of tree crops and the consequential benefits to accrue to the country.

It will start with six out of the seven tree crops being promoted by the Planting for Export and Rural Development (PERD) programme — cashew, oil palm, shea, coconut, mango and rubber.

To operate along the lines of the Cocoa Marketing Board (COCOBOD), the TCDA will put in place policies and programmes to guide research into, the production, pricing and marketing of tree crops.

A 29-member Board of Directors of the authority, chaired by Mr Stephen Sekyere-Abankwa, was also inaugurated.

Other members are a former Deputy Minister of Agriculture, Mr William Quaitoo, who is the Chief Executive of the authority, and a representative each from the ministries of Food and Agriculture, Trade and Industry and Finance.

Besides, stakeholders in the selected tree crops have four directors each on the board to make up the 29-member board.

Dr Akoto said it was unacceptable that 70 years after the establishment of COCOBOD, Ghana remained a mono-crop agricultural economy.

Against the background of the high international demand for and the competitiveness of tree crops on the world market, he said, “this calls for priority attention for Ghana's tree crop sector”.

According to him, it was necessary to ensure that the full benefits possible were realised from the sector to accelerate economic development on a sustainable basis.

He indicated that the inauguration of the board constituted the strategic response of the government to leverage the huge international potential market.

He said the TCDA would have six zonal offices across the country, with each located at the heart of the production centre of the respective selected tree crop.

President Nana Addo Dankwa Akufo-Addo, who inaugurated the authority, described it as a game-changer.

He said the selected crops had the potential to change the economy of Ghana and overtake cocoa as its major cash crop.

“If the economic potential of the six selected tree crops is properly harnessed, Ghana could soon increase exponentially its agricultural export earnings,” he said.

As part of the effort to promote the crops, he said, 220,229 farmers had been enrolled onto the PERD programme, cultivating 235,850 hectares of land with approximately 30 million of the various seedlings produced.

“At full implementation, the PERD programme will link agriculture to industry through the provision of a solid raw material base for industrialisation, develop our rural economies and assist in the structural transformation of the national economy. All these will propel growth, create employment, particularly for the youth and create wealth,” the President said.

He said he was convinced that, with time, the steps taken by the government under the PERD would be fully appreciated when all the initiatives were implemented.

“The over-arching vision of a Ghana Beyond Aid is neither rhetoric nor gimmickry. We are determined, through action, to achieve this vision, and today’s programme is a clear indication of our total commitment. With God on our side, we shall surely succeed,” he added.