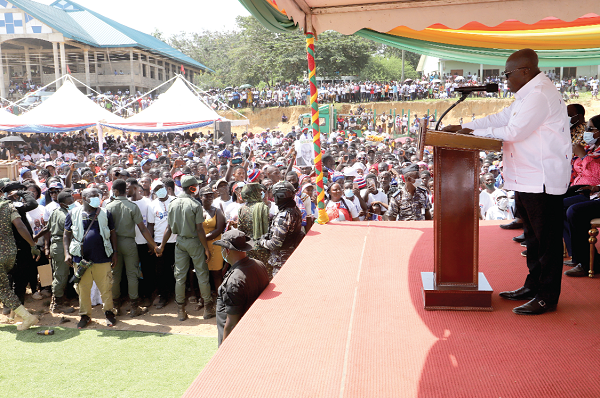 President Nana Addo Dankwa Akufo Addo has said a bauxite company will soon commence work at Nyinahin in the Atwima Mponua District in the Ashanti Region for the benefit of all.

"This bauxite nearly became the personal property of one individual, but we are going to ensure that the entire country benefit from the resources, especially the people of Nyinahin," he added.

President Akufo-Addo was addressing a durbar at Nyinahin at the end of his three-day campaign tour of the region.

Hundreds of party faithful turned out at the Nyinahin R/C School park where the durbar was held to show their support to the President and the government.

President Akufo-Addo said the bauxite company, which he did not name, had completed its preparatory works and that soon workers would arrive at site to commence business which would in turn create job opportunities for the youth and also accelerate the development of the area.

“Nyinahin stands to gain much from the ‘Four More for Nana’ slogan as we are preparing to start bauxite mining to create more jobs and bring development in Nyinahin,” he added.

President Akufo-Addo reiterated his call to the people to turn out in their numbers on Monday and vote massively for the NPP and its parliamentary candidates.

He told the people not to be complacent and assume that the party had won already and as such would not vote.

The President said they should not allow apathy to deny the party victory for the government to continue with its good policies to better their lot.

The Minister of Trade and Industry, Mr Alan Kwadwo Kyerematen, said Monday’s polls would be a choice between the performance of the NPP and the promises of the NDC, a party that must be rejected by all.

According to him, the government had fulfilled almost all of its promises to the people and also made heavy investment in the economy which was driving the development of the country, especially, the agriculture and education sectors.

For his part, the Minister of Youth and Sports and Member of Parliament (MP) for the Atwima Mponua Constituency, Mr Isaac Kwame Asiamah, thanked the President and the government for bringing development to the Atwima Mponua District.

He said most of the developmental projects, including a stadium in the district, were carried out by the government.