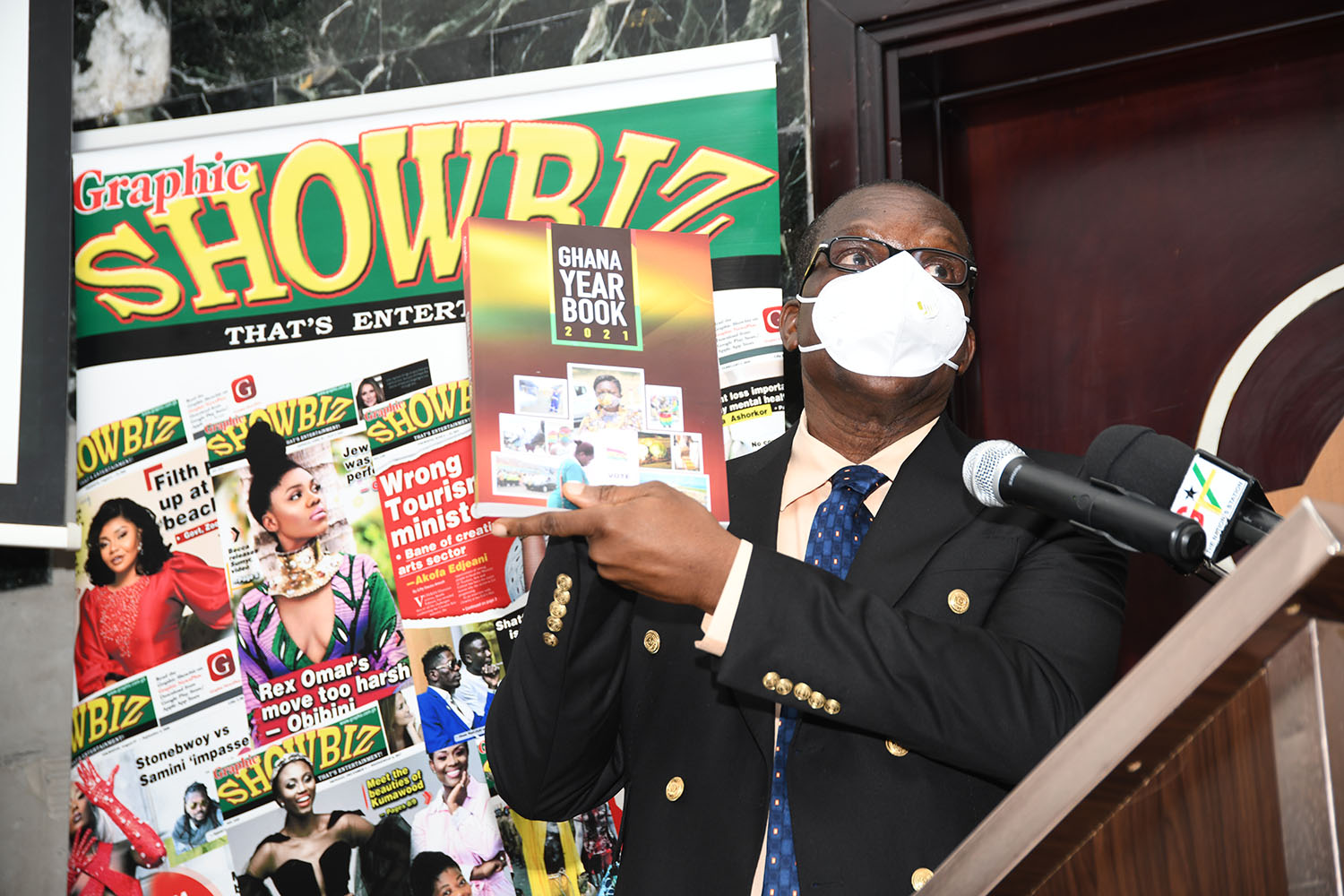 After a 40-year hiatus, the Graphic Communications Group Limited (GCGL) has relaunched the Ghana Year Book (GYB), an annual publication that takes stock of very important developments of the preceding year in Ghana.

The GYB, which publication started in the 1950s, was a value addition product of the GCGL that became popular until the 1970s when the publication ceased.

At an event to relaunch the publication in Accra Thursday, the Managing Director of the GCGL, Mr Ato Afful, said the new GYB had maintained the quality and standard that endeared the book to readers in the past.

“In addition to an improved content, it captures the nation’s events as they unfolded in the previous year which includes the swearing-in of the fifth President of the Fourth Republic, the election of the first Speaker of Parliament from an opposition party, the impact of COVID-19 on the economy, the demise of his Excellency JJ. Rawlings, the 2020 elections, the Graphic @70 anniversary among others”.

The MD said the publication also captured historical dates and facts about the country and information of companies and government institutions.

Each chapter also presents a theme with adequate information for readers, refreshing their memories of historical events.

Mr Afful said the rebirth of the GYB became possible with the immense support of the Chairman of the Board of Directors of the GCGL, Professor Kwame Karikari and the former Speaker of Parliament, Rt Hon. Aaron Mike Oquaye, who urged the management of the company to reintroduce the publication.

In an interview after the launch, Prof. Karikari told the Daily Graphic that in a thriving democracy such as Ghana, the people needed such publications to help build on the strong democratic credentials of the country.

“We now have a thriving democracy, but democracy survives on accurate, reliable and relevant information for citizens, and the Ghana Year Book will provide that service for the people by documenting, keeping and making available the very salient issues, especially about our institutions, business entities and personalities that drive our society,” he added.

The colourful event, which was held at the plush Alisa Hotel in Accra, brought together notable personalities in the country, including the Speaker of Parliament, Mr Alban Kingsford Sumana Bagbin, who did the launch; the Managing Director of the ADB Bank, Dr John Kofi Mensah; the Director-General of the State Interests and Governance Authority (SIGA), Mr Asamoah Boateng, and Brigadier General Benjamin Amoah-Boakye, who represented the Chief of Defence Staff (CDS).

Also unveiling were the Executive Secretary of the Advertisers Association of Ghana, Mr Francis Dadzie, the Editor of the Daily Graphic, Mr Kobby Asmah, among others.

After outdooring the publication, Mr Bagbin purchased an autographed copy signed by the GCGL MD, Mr Afful, and the Board Chairman, Prof. Karikari for GH₵ 20,000, while the MD of ADB Bank, Mr Mensah, won the bid to buy the first auctioned copy of the book for GH₵ 12,000.

Brigadier General Amoah-Boakye also bought a copy on behalf of the CDS for GH₵ 5,000 while Mr Asamoah Boateng made a bid for GH₵8,000 for a copy.

The auctioneer who led the sales of the first copies of the book, Mr L A Apanga , also bought a copy of the 20 books that were sold at the event for GH₵1,000. 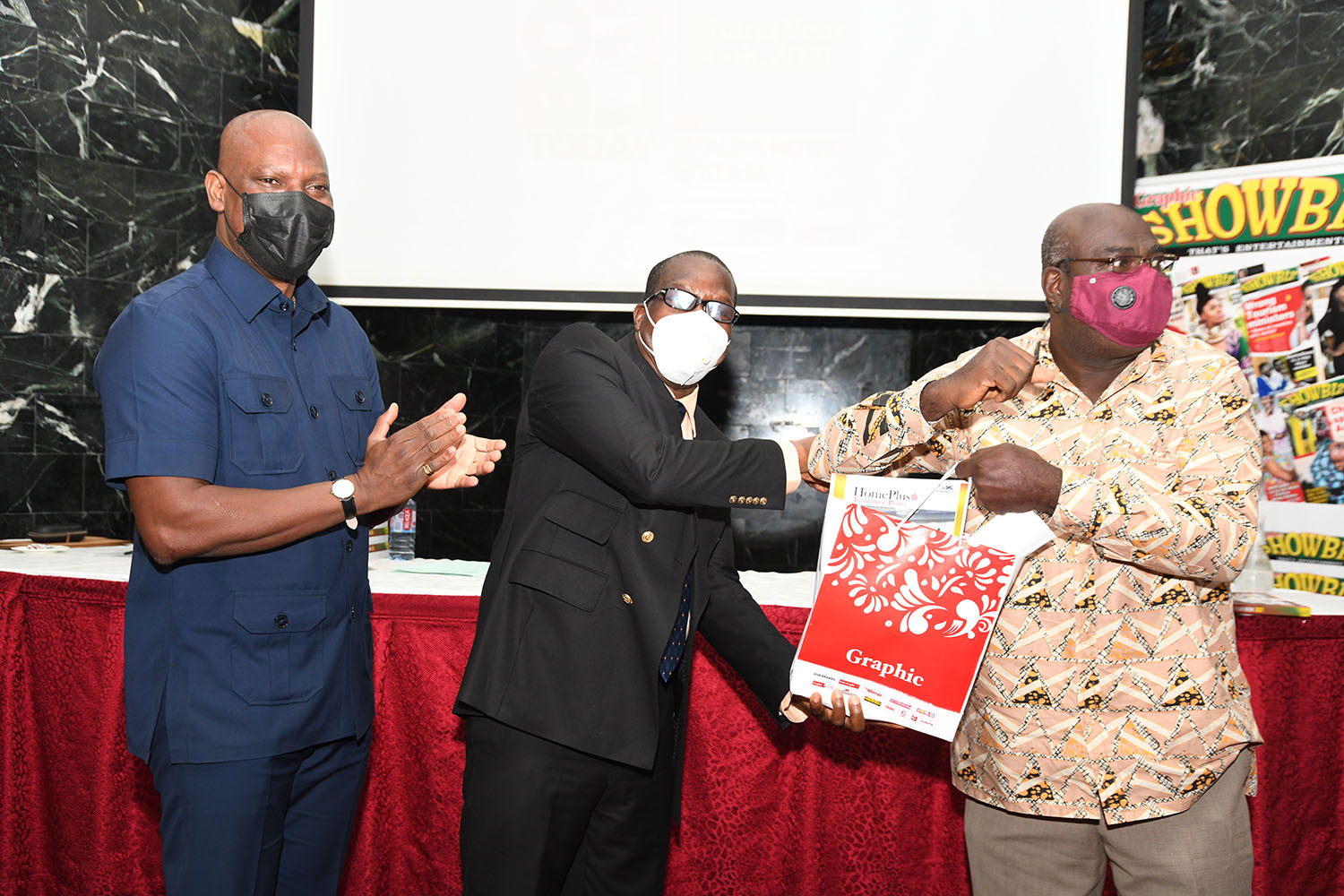 Copies of the book will be on sale at all regional offices of the GCGL , book shops and shopping malls across the country at GH₵150 per copy.

Copies of the book would also be made available at some public libraries across Ghana.

After outdooring the publication, the Speaker of Parliament, Mr Alban Bagbin purchased an autographed copy signed by the GCGL MD, Mr Afful, for GH¢20,000.

Mr Dadzie bought a copy for GH¢12,050 on behalf of the Advertisers Association of Ghana while the MD of ADB Bank, Mr Mensah won the bid to buy the second auctioned copy of the book for GH¢12,000.