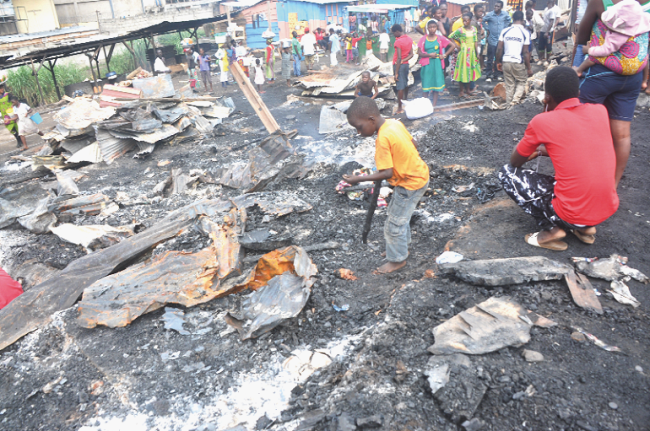 The aftermath of the fire. Pictures: EMMANUEL BAAH
30.5k Shares

A one-and-a-half-year-old boy, Mahamadu Majeed, was burnt to death at a slum within Asafo in Kumasi, popularly called BB, at 11 p.m.  last Wednesday when fire razed down the wooden structure in which he was sleeping.

The charred body of the boy, who had been left alone in the room during a blackout, has been deposited at the Komfo Anokye Teaching Hospital (KATH) morgue for autopsy.

According to Majeed’s mother, 15-year-old Nafisa Musa, she and her 22-year-old husband, Mahamadu Amidu, were out in search for an item to buy when they heard screams from neighbours and had to rush back to their abode.

When the couple got to the scene, the fire, which had started from two adjoining structures, had completely engulfed their wooden structure and there was very little they could do.

According to an eyewitness, when a team of firefighters arrived at the scene, the fire had spread to about 40 structures, causing damage to property valued at hundreds of Ghana cedis.

The Railway Station Officer of the Ghana Police Service, Chief Inspector Mr Eric Ayilgia, who led a team of police personnel to the scene, told the Daily Graphic that he had a distress call from an eyewitness, following which they proceeded to the scene.

Unfortunately, he said, when they got to the scene, “the damage had already been caused”.

He confirmed that the charred body had been deposited at KATH for autopsy.

Residents of the BB community, an area noted for crimes and drugs, were shattered by the incident, as some were still wailing when the Daily Graphic team visited the place.

A few others were seen trying to salvage some belongings.