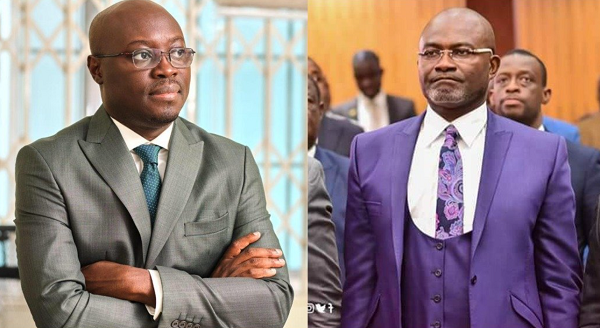 The MP for Ajumako-Enyan-Esiam, Dr Cassiel Ato Forson has sued the Assin Central MP, Mr Kennedy Ohene Agyapong for defamation over allegations that he (Forson) is the mastermind behind a plot to assassinate the Minister for Gender and Social Protection, Cynthia Morrison.

Mr Forson's suit filed on Tuesday, October 27, 2020, said while he has not been mentioned in the charge sheet of the ongoing court case or invited by the police for questioning, Mr Agyapong went ahead to make libellous statements without any justification against his person.

Kencity Media Ghana Ltd, the owners of NET2 are the second defendants in the case.

Mr Forson wants the court to ensure that Kennedy Agyapong and Net 2 TV retract and apologize for the comments within seven days and remove all such defamatory comments from their social media pages including YouTube.

In a televised broadcast on Accra-based Net 2 Television on October 26, the Assin Central MP alleged that the suspects told the police that they were sent by Cassiel Ato Forson to undertake the act.

“The boys mentioned Cassiel Ato Forson’s name to the police. Why is it that the police would not like to speak the truth? Ato Forson gave the boys to the parliamentary candidate Paul Ofori Amoah.

“The parliamentary candidate is very calm but Ato Forson did that. He should come out and challenge me,” Kennedy Agyapong said.

The National Democratic Congress (NDC) parliamentary candidate for Agona West, Paul Ofori Amoah has been charged provisionally with preparation to commit murder and abetment to commit murder as part of investigations into an alleged plot to kill the incumbent MP, Mrs Cynthia Mamle Morrison.

The candidate is alleged to have admitted to issuing cheques found on four persons the police describe as 'suspicious characters' arrested at a hotel in Swedru on Saturday.

The Public Relations Officer of the Regional Police Command, Deputy Superintendent of Police, Ms Irene Oppong said the police had picked the cheques belonging to Paul Amoah at the hotel where the suspects were picked up and invited him to assist in investigations.