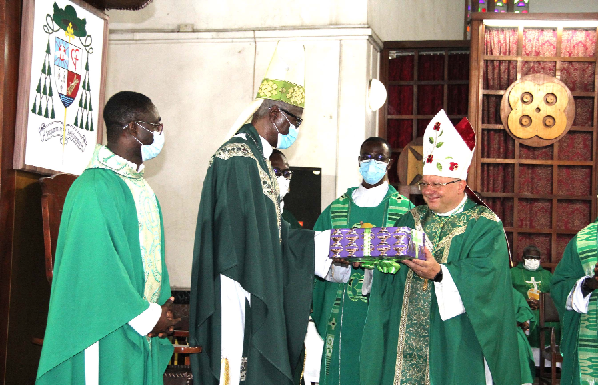 The Apostolic Nuncio to Ghana, Most Rev. Henryk Mieczysław Jagodzinski, last Sunday climaxed a five-day official pastoral visit to the Catholic Archdiocese of Accra with a Mass at the Holy Spirit Cathedral in Accra.

He used the occasion to honour three senior priests with the title of Monsignor for their distinguished services.

During the visit, which started last Wednesday, Most Rev. Jagodzinski was hosted to a reception by the Metropolitan Archbishop of Accra, Most Rev. John Bonaventure Kwofie, and the laity.

On Thursday, the Apostolic Nuncio celebrated Mass with priests at the Christ the King Catholic Church at Cantonments in Accra and also at Our Lady of Mercy Parish in Tema Community 1 on Friday. On the same day, some lay faithful were made knights and dames.

On Saturday, he ordained six deacons as priests into the holy priesthood: five diocesan priests and one religious at the Corpus Christi Catholic Church, Sakumono.

In May 2020, Pope Francis appointed Monsignor Henryk Mieczysław Jagodzinski to the position of Apostolic Nuncio of Ghana, and elevated him to the rank of Archbishop.

Delivering the homily at last Sunday’s Mass, Most Rev. Jagodzinski said whoever wanted to be close to Jesus must make a serious and faithful decision, which, he said, was not easy.

In a reminder to Christians that Jesus did not come to give believers smooth words and to make them feel good, he said: “He did not go to the cross for pious platitudes and pleasant religious feelings”.

“Whoever, therefore, truly stood for Christ will not necessarily be applauded as people will shy away from such a Christian, and old friendships will end and he will face conflicts even in his own home”.

“This is what Jesus foreshadows when He says: From now on, five will be split in one house: three will stand against two and two will be against three,” he said.

“with great strength and fervour, and ultimately always victorious”.

“This is because the fire that burned in them is the fire of Christ. The example of the saints, who did not fall from heaven but grew up here on earth — often with considerable difficulty — can inspire us to imitate them or at least to try it,” he said.

The Cathedral Administrator, Very Rev. Fr Clement Wilson, said the diocese was happy to have back the Apostolic Nuncio.

He said his visit would honour Monsignors and senior priests who had worked so hard for the diocese.

“We have longed for this; it will interest you to know that the last time we had the creation of Monsignors was in 2005, 17 years ago,” he said.