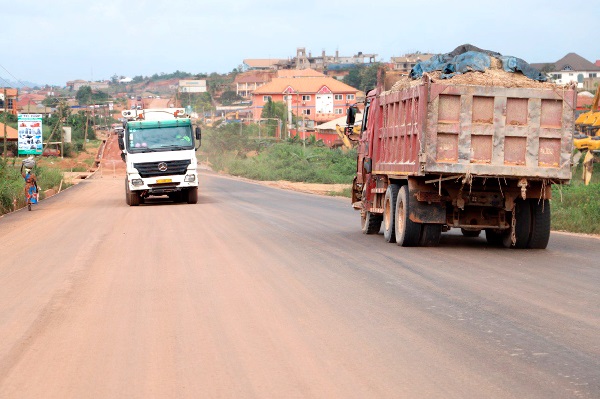 The construction of the Anwia-Nkwanta to Obuasi road is 80 per cent complete, a Resident Engineer of the Ghana Highway Authority, Mr Ernest Owusu-Ansah, has disclosed.

The completed work represents 23 kilometres of the 28-kilometre road, with the remaining five kilometres still under construction.

“The contractor, Joshob Construction Limited, is ahead of schedule as the project was expected to be completed by 2023.

“Majority of the work has been done so far, with 23 kilometres out of the 28 kilometres completed,” Mr Owusu-Ansah said when the Ashanti Regional Minister, Mr Simon Osei Mensah, inspected the project last Saturday.

The inspection formed part of the minister’s two-day working visit to some project sites in the region.

The resident engineer explained that the remaining five-kilometre stretch leading to the Obuasi township was being dualised to reduce the traffic congestion on that part of the road.

“The huge traffic congestion we used to go through will soon be a thing of the past,” he assured.

Mr Owusu-Ansah appealed to road users, especially commercial drivers, to reduce speed and to help reduce the chances of accidents on the road.

He said as long as the road had not been completed and officially handed over, it was necessary to show extreme care on the road in order not to harm construction workers or damage materials and items on-site, stressing that “men are still at work”.

Mr Osei Mensah expressed satisfaction with the progress of work so far and commended the contractor for the efficient manner he was working to complete work ahead of time.

The minister also urged the contractor to pay equal attention to quality just as he had committed himself to a timeous delivery.

He further advised other contractors working on other road projects within the region to emulate Joshop, warning that the authorities would not accept anything other than quality.

The Kumasi-Obuasi road is one of the major roads in the Ashanti Region, linking travellers to the Obuasi township through to Dunkwa, Assin-Fosu in the Central Region, Takoradi, among other towns.

Until recently, the stretch was considered an accident-prone route.

Residents on numerous occasions had mounted road blocks and demonstrated to drum home their concern over the nature of the road.