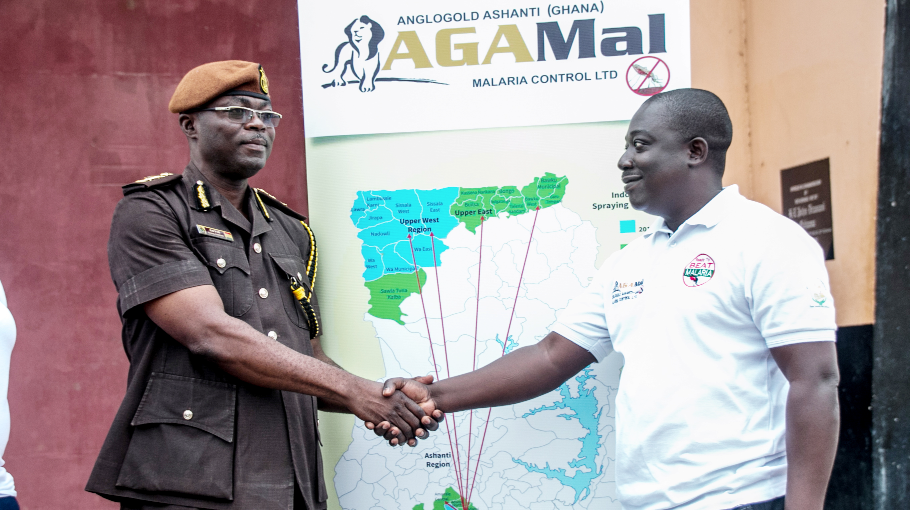 Mr Asiedu exchanging pleasantries with Mr Egyir prior to the beginning of the spraying exercise
30.5k Shares

10-day exercise expected to end on is part of AGAMAL’s support to the National Malaria Control Programme.

According to the National Malaria Control Programme, 70 per cent of all deaths, particularly in children under five, is as a result of malaria.

Speaking to a team of journalists at the Nsawam Medium Security Prisons last Friday during the exercise, the Programmes Director of AGAMAL, Mr Samuel Asiedu, said AGAMAL was carrying out the exercise in partnership with the Ghana Malaria Control Programme, the Ministry of Health, the Ghana Health Service and the AngloGold Ashanti Ghana Limited.

He said the exercise was being funded by , a global health initiative working to end tuberculosis, HIV/AIDS, malaria and Hepatitis C through one of its global programmes known as NgenIRS.

NgenIRS is aimed at expanding the use of new anti-malarial insecticides and Innovative Vector Control Consortium (IVCC) to help deal with malaria vector resistance and other vector challenges.

The IVCC is a public-private partnership international organisation which develops new insecticides for use in bed nets and indoor residual spraying.

Mr Asiedu said although the use of nets was providing some kind of help, considering the overcrowded nature of the facility which was surrounded by lots of vegetation, the nets alone could not provide the needed results.

“The initiative forms part of AGAML’s core mandate to build to boost the national malaria control initiative,” he said.

The Eastern Regional Commander of Prisons, Deputy Director of Prisons, Mr Isaac Egyir, said the overwhelming number of inmates, limited space and conditions at the prison had resulted in overcrowding which made the occupants of the facility vulnerable to malaria and other ailments.

He said currently there were about 3,500 inmates at the prison.

“We are very grateful to AGAMAL because this exercise is critical and timely because mosquitoes and bedbugs breed easily in the cells due to overcrowding and coupled with limited resources, it is difficult to adequately fight mosquito and pest infestation,” he said.

Additionally, he said the cost of treatment of the huge number of malaria cases recorded at was huge and put more burden on its already scarce financial resources.

Mr Egyir pleaded with other benevolent institutions and individuals to emulate the example of to make life bearable for the unfortunate ones who found themselves in the prisons.

The Medical Superintendent of the Prison’s Clinic, DSP Dr Lawrence Kofi Acheampong, said the management of the prison, in partnership with the clinic, had prioritised malaria control in its programme.

He said one of the ways they were doing that was through public health campaigns aimed at sensitising inmates and prison officers to the causes of malaria, risk factors, among other needful information.

Writer’s email, This email address is being protected from spambots. You need JavaScript enabled to view it.